What's growing on this lemon?

Would you believe penicillin? Penicillin is a mold, which of course is a fungus, one that has helped millions, if not billions, of people.

Whenever you eat pizza, you eat fungi, even if you don’t like your pizza with mushrooms. That’s because pizza dough contains yeast. Do you know other foods that are made with fungi?

Humans have collected and grown mushrooms for food for thousands of years. Figure belowshows some of the many types of mushrooms that people eat. Yeasts are used in bread baking and brewing alcoholic beverages. Other fungi are used in fermenting a wide variety of foods, including soy sauce, tempeh, and cheeses. Blue cheese has its distinctive appearance and flavor because of the fungus growing though it (see Figure below). These are just a few of the many species of edible mushrooms consumed by humans. 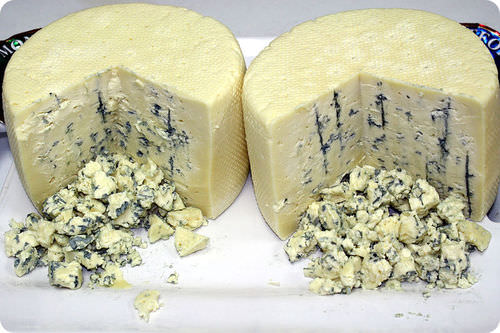 Blue Cheese. The dark blue strands running through this cheese are a fungus. In fact, this cheese is moldy! The fungus isPenicillium roqueforti, a type of mold.

Harmless fungi can be used to control pathogenic bacteria and insect pests on crops. Fungi compete with bacteria for nutrients and space, and they parasitize insects that eat plants. Fungi reduce the need for pesticides and other toxic chemicals.

Other Uses of Fungi

Fungi are useful for many other reasons.