What exactly is a fungus?

They're not animals or plants, and definitely not protists. So they cannot photosynthesize or eat. And they are much more than mushrooms.

Do you see the organisms growing on the bread in the Figure below? They belong to the Kingdom Fungi. Molds growing on foods are some of the most common fungi in our everyday lives. These organisms may seem useless, gross, and costly. But fungi play very important roles in almost every terrestrial ecosystem on Earth. 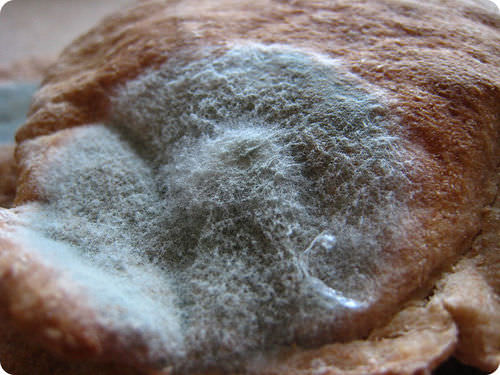 The mold growing on this bread is a common fungus.

Fungi (singular, fungus) are a kingdom in the domain Eukarya. The fungi kingdom may contain more than a million species, but fewer than 100,000 have been identified. As shown in the Figure below, fungi include mushrooms and yeasts in addition to molds. Most fungi are multicellular, but some exist as single cells. Single-celled fungi are known as yeasts. Fungi spend most of their life cycle in the haploid state. They form diploid cells only during sexual reproduction. Like the cells of protists and plants, the cells of fungi have cell walls. But fungi are unique in having cell walls made of chitin instead of cellulose. Chitin is a tough carbohydrate that also makes up the exoskeleton (outer skeleton) of insects and related organisms.

Fungi are found all around the world, and grow in a wide range of habitats, including deserts. Most grow in terrestrial environments, but several species live only in aquatic habitats. Most fungi live in soil or dead matter, and in symbiotic relationships with plants, animals, or other fungi. Fungi, along with bacteria that are found in soil, are the primary decomposers of organic matter in terrestrial ecosystems. The decomposition of dead organisms returns nutrient to the soil, and the environment.