What grows just about anywhere there is decaying material?

Mold. This slime mold, shown growing on dead wood, is a fungus-like protist. Though this mold does not have a mouth, essentially it is still “eating” this decaying material. Fungus-like protists are molds. They are absorptive feeders on decaying organic matter. They resemble fungi, and they reproduce with spores as fungi do. However, in other ways, they are quite different from fungi and more like other protists. For example, they have cell walls made of cellulose, whereas fungi have cell walls made of chitin. Like other protists, they have complicated life cycles with both asexual and sexual reproduction. They are motile during some stages of their life cycle. Two major types of fungus-like protists are slime molds and water molds.

Slime molds are fungus-like protists commonly found on rotting logs and compost. They move very slowly in search of decaying matter to eat. When food is scarce, individual cells swarm together to form a blob-like mass, like the “dog vomit” slime mold in the Figure below. The mass glides along on its own secretions, engulfing decaying organic matter as it moves over it. 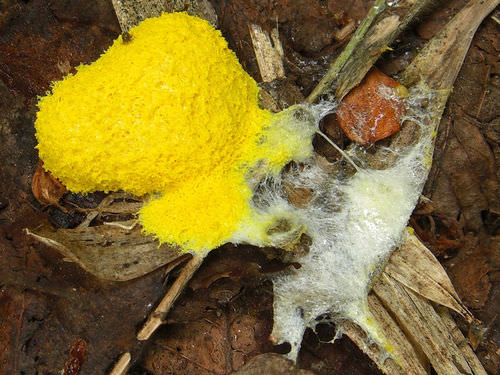 There are two types of slime molds when it comes to how they swarm: acellular and cellular.

Cellular slime molds are used as model organisms in molecular biology and genetics. They may be the key to how multicellular organisms evolved. Can you explain why?

Water molds are commonly found in moist soil and surface water. Many are plant pathogens that destroy crops. They infect plants such as grapes, lettuce, corn, and potatoes. Some water molds are parasites of fish and other aquatic organisms.