This virus looks alive, but is it?

Which of the three domains of life do viruses belong to? None. Why? Viruses are usually considered to be nonliving. Viruses do not meet most of the criteria of life. They are not even made of cells.

A virus is a sub-microscopic particle that can infect living cells. Viruses are much smaller than prokaryotes, ranging in size from about 20–300 nanometers (nm), though some can be larger. Prokaryotes are typically 0.5–5.0 micrometers (µm) in length. For example, if a virus was about the size of three soccer balls lying side-by-side, then a prokaryote would be about the size of soccer field.

An individual virus is called a virion. It is a tiny particle much smaller than a prokaryotic cell. Because viruses do not consist of cells, they also lack cell membranes, cytoplasm, ribosomes, and other cell organelles. Without these structures, they are unable to make proteins or even reproduce on their own. Instead, they must depend on a host cell to synthesize their proteins and to make copies of themselves. Although viruses are not classified as living things, they share two important traits with living things. They have genetic material, and they can evolve. This is why the classification of viruses has been controversial. It calls into question just what it means to be alive. What do you think? How would you classify viruses?

The study of viruses is known as virology and people who study viruses are known asvirologists. Viruses infect and live inside the cells of living organisms. When viruses infect the cells of their host, they may cause disease. For example, viruses cause AIDS (Acquired immune deficiency syndrome), influenza (flu), chicken pox, and the common cold. Therapy is sometimes difficult for viral diseases. Antibiotics have no effect on viruses and only a few antiviral drugs are available for some diseases. One of the best ways to prevent viral diseases is with a vaccine, which produces immunity. But vaccines are available for only a few diseases.

Mimivirus, shown in the Figure below, is the largest known virus, with a diameter of 400 nm. Protein filaments measuring 100 nm stick out from the surface of the virus, which increases the diameter of the virus to about 600 nm. This is bigger than a small bacterial cell. The virus appears hexagonal under an electron microscope; the viral shape is icosahedral (having 20 faces or sides). 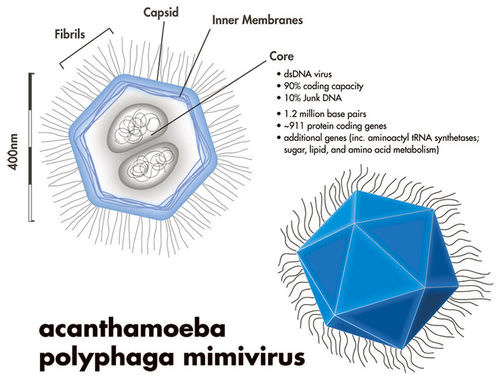 The largest known virus, called mimivirus, is so large that scientists first mistook it for a bacterium. It was first discovered in amoeba, in 1992, and was identified as a virus in 2003. Scientists believe that mimivirus may cause certain types of pneumonia in humans. The core contains DNA, with the majority of the DNA in genes, and only 10% DNA of unknown function ("junk" DNA).

Viruses can replicate only by infecting a host cell. They cannot reproduce on their own. Viruses are not cells; they are a strand of genetic material within a protective protein coat called a capsid. They infect a wide variety of organisms, including both eukaryotes and prokaryotes. Once inside the cell, they use the cell’s ATP, ribosomes, enzymes, and other cellular parts to replicate.

Viruses can be found almost anywhere there is life, including living within prokaryotes. A phage is a virus that infects prokaryotes. Phages are estimated to be the most widely distributed and diverse entities in the biosphere, even more numerous than prokaryotic organisms. Phages can be found everywhere their hosts are found, such as in soil, in the intestine of animals, or seawater. Up to 109 virions have been found in a milliliter of seawater, and up to 70 percent of marine bacteria may be infected by phages. They are also found in drinking water and in some foods, including fermented vegetables and meats, where they control the growth of bacteria.