How do bacteria reproduce?

Essentially, they grow and divide. Show here is an example of Methicillin-resistantStaphylococcus aureus, or MRSA, bacteria. Notice how one bacterium is dividing into two.

Unlike multicellular organisms, increases in the size of prokaryotes (cell growth) and their reproduction by cell division are tightly linked. Prokaryotes grow to a fixed size and then reproduce through binary fission.

Binary fission is a type of asexual reproduction. It occurs when a parent cell splits into two identical daughter cells. This can result in very rapid population growth. For example, under ideal conditions, bacterial populations can double every 20 minutes. Such rapid population growth is an adaptation to an unstable environment. Can you explain why?

Schematic diagram of cellular growth (elongation) and binary fission of bacilli. Blue and red lines indicate old and newly-synthesized bacterial cell wall, respectively. The DNA inside the bacterium is copied and the daughter cells receive an exact copy of the parent DNA. Fission involves a cytoskeletal protein FtsZ that forms a ring at the site of cell division.

In asexual reproduction, all the offspring are exactly the same. This is the biggest drawback of this type of reproduction. Why? Lack of genetic variation increases the risk of extinction. Without variety, there may be no organisms that can survive a major change in the environment.

Prokaryotes have a different way to increase genetic variation. It’s called genetic transfer or bacterial conjugation. It can occur in two ways. One way is when cells “grab” stray pieces of DNA from their environment. The other way is when cells directly exchange DNA (usually plasmids) with other cells. For example, as shown in Figure below, the donor cell makes a structure called an F pilus, or sex pilus. The F pilus attaches one cell to another cell. The membranes of the two cells merge and genetic material, usually a plasmid, moves into the recipient cell. Genetic transfer makes bacteria very useful in biotechnology. It can be used to create bacterial cells that carry new genes. 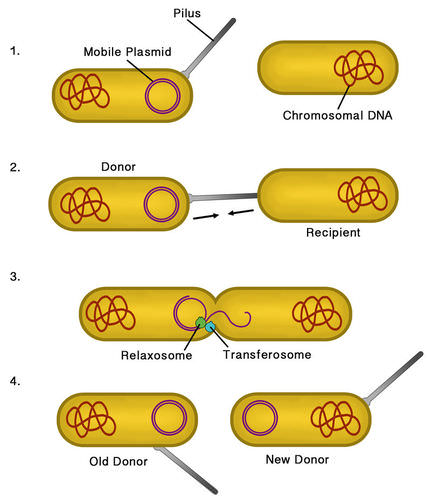 A flowchart showing bacterial conjugation. The donor cell makes a structure called an F pilus, or sex pilus. The F pilus attaches one cell to another cell. The membranes of the two cells merge and genetic material, usually a plasmid, moves into the recipient cell.