Peas. Some round and some wrinkled. Why?

That's what Mendel asked. He noticed peas were always round or wrinkled, but never anything else. Seed shape was one of the traits Mendel studied in his first set of experiments.

Mendel first experimented with just one characteristic of a pea plant at a time. He began with flower color. As shown in Figure below, Mendel cross-pollinated purple- and white-flowered parent plants. The parent plants in the experiments are referred to as the P (for parent)generation. You can explore an interactive animation of Mendel’s first set of experiments at this link: http://www2.edc.org/weblabs/Mendel/mendel.html. 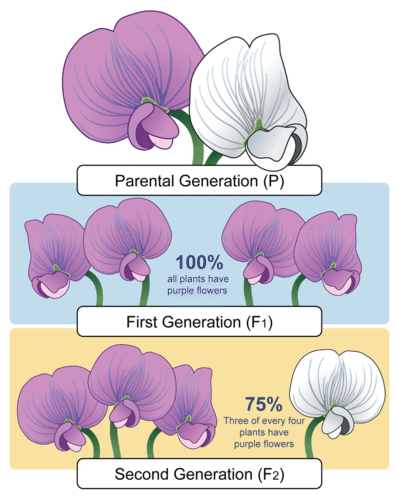 This diagram shows Mendel's first experiment with pea plants. The F1 generation results from cross-pollination of two parent (P) plants, and contained all purple flowers. The F2 generation results from self-pollination of F1 plants, and contained 75% purple flowers and 25% white flowers. This type of experiment is known as a monohybrid cross.

Mendel did the same experiment for all seven characteristics. In each case, one value of the characteristic disappeared in the F1 plants and then showed up again in the F2 plants. And in each case, 75 percent of F2 plants had one value of the characteristic and 25 percent had the other value. Based on these observations, Mendel formulated his first law of inheritance. This law is called the law of segregation. It states that there are two factors controlling a given characteristic, one of which dominates the other, and these factors separate and go to different gametes when a parent reproduces.