Photosynthesis in desert plants has evolved adaptations that conserve water. In harsh, dry heat, every drop of water must be used to survive. Because stomata must open to allow for the uptake of CO2, water escapes from the leaf during active photosynthesis. Desert plants have evolved processes to conserve water and deal with harsh conditions. A more efficient use of CO2 allows plants to adapt to living with less water.

Some plants such as cacti can prepare materials for photosynthesis during the night by a temporary carbon fixation and storage process, because opening the stomata at this time conserves water due to cooler temperatures. In addition, cacti have evolved the ability to carry out low levels of photosynthesis without opening stomata at all, a mechanism for surviving extremely dry periods.

Xerophytes, such as cacti and most succulents, also use
phosphoenolpyruvate (PEP) carboxylase to capture carbon dioxide in a process called crassulacean acid metabolism (CAM). In contrast to C4 metabolism, which physically separates the CO2 fixation to PEP from the Calvin cycle, CAM temporally separates these two processes.

CAM plants have a different leaf anatomy from C3 plants, and fix the CO2 at night, when their stomata are open. CAM plants store the CO2 mostly in the form of malic acid via carboxylation of phosphoenolpyruvate to oxaloacetate, which is then reduced to malate. Decarboxylation of malate during the day releases CO2 inside the leaves, thus allowing carbon fixation to 3-phosphoglycerate by RuBisCO. Sixteen thousand species of plants use CAM.

The C4 pathway bears resemblance to CAM; both act to concentrate CO2 around RuBisCO, thereby increasing its efficiency. CAM concentrates it temporally, providing CO2 during the day and not at night, when respiration is the dominant reaction.

C4 plants, in contrast, concentrate CO2 spatially, with a RuBisCO reaction centre in a “bundle sheath cell” that is inundated with CO2. Due to the inactivity required by the CAM mechanism, C4 carbon fixation has a greater efficiency in terms of PGA synthesis. 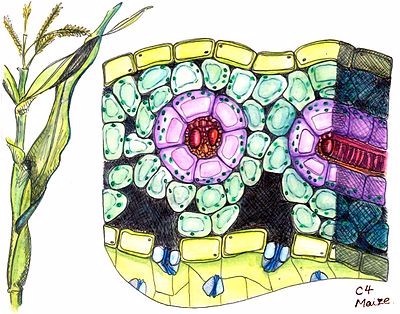 Cross section of a C4 plant, specifically of a maize leaf. Drawing based on microscopic images courtesy of Cambridge University Plant Sciences Department.

C4 plants can produce more sugar than C3 plants in conditions of high light and temperature. Many important crop plants are C4 plants, including maize, sorghum, sugarcane, and millet. Plants that do not use PEP-carboxylase in carbon fixation are called C3 plants because the primary carboxylation reaction, catalyzed by RuBisCO, produces the three-carbon 3-phosphoglyceric acids directly in the Calvin-Benson cycle. Over 90% of plants use C3 carbon fixation, compared to 3% that use C4 carbon fixation; however, the evolution of C4 in over 60 plant lineages makes it a striking example of convergent evolution.