Auxins are plant hormones. The most important auxin produced by plants is indole-3-acetic acid (IAA). It plays important roles in a number of plant activities, including: 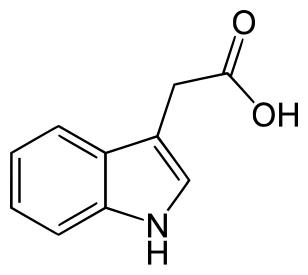 From the very first mitotic division of the zygote, gradients of auxin guide the patterning of the embryo into the parts that will become the organs of the plant:

The formation of new leaves in the apical meristem is initiated by the accumulation of auxin. Already-developing leaves deplete the surrounding cells of auxin so that the new leaves do not form too close to them. In this way, the characteristic pattern of leaves in the plant is established. Auxin also controls the precise patterning of the epidermal cells of the developing leaf.

Plant shoots display positive phototropism: when illuminated from one direction, the shoot proceeds to grow in that direction. Proposed Mechanism for phototropism is a multiple process. The direction of light is detected at the tip of the shoot with (blue light is most effective). It is absorbed by a flavoprotein called phototropin. Flavoproteins contain flavin as a prosthetic group. Auxin moves from the tip down. An auxin transporter - one of the PIN proteins - is inserted in the plasma membrane at the lateral face of cells of the shoot. Auxin is pumped out of these efflux transporters and accumulates in the cells on the shady side. This stimulates elongation of the cells on the shady side causing the shoot to bend toward the light.

Gravitropism is a plant growth response to gravity.

Possible Mechanism of Gravitropism in Roots

When a root is placed on its side, 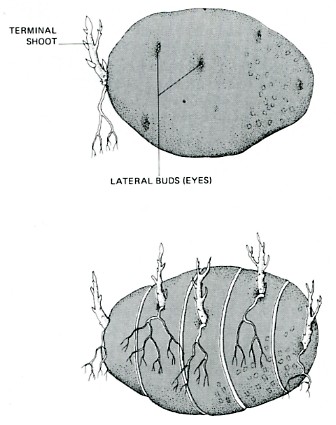 Pollination of the flowers of angiosperms initiates the formation of seeds. As the seeds mature, they release auxin to the surrounding flower parts, which develop into the fruit that covers the seeds.

Some commercial growers deliberately initiate fruit development by applying auxin to the flowers. Not only does this ensure that all the flowers will "set" fruit, but it also maximizes the likelihood that all the fruits will be ready for harvest at the same time.

Auxin also plays a role in the abscission of leaves and fruits. Young leaves and fruits produce auxin and so long as they do so, they remain attached to the stem. When the level of auxin declines, a special layer of cells — the abscission layer — forms at the base of the petiole or fruit stalk. Soon the petiole or fruit stalk breaks free at this point and the leaf or fruit falls to the ground. 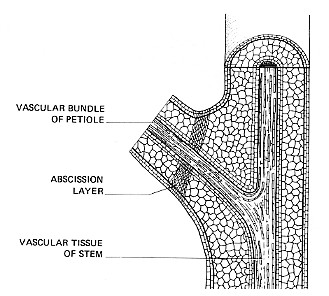 The figure on the right shows a nice demonstration of the role of auxin in abscission. If the blade of the leaf is removed, as shown in the figure, the petiole remains attached to the stem for a few more days. The removal of the blade seems to be the trigger as an undamaged leaf at the same node of the stem remains on the plant much longer, in fact, the normal length of time. If, however, auxin is applied to the cut end of the petiole, abscission of the petiole is greatly delayed.

Fruit growers often apply auxin sprays to cut down the loss of fruit from premature dropping.

Horticulturists may propagate desirable plants by cutting pieces of stem and placing them base down in moist soil. Eventually adventitious roots grow out at the base of the cutting. The process can often be hastened by treating the cuttings with a solution or powder containing a synthetic auxin.

Auxin moves through the plant by two mechanisms: It passes in the sap moving through the phloem from where it is synthesized (its "source", usually the shoot) to a "sink" (e.g., the root). It also passes from cell to cell by the following mechanism.

Identifying the signals that direct the appropriate placement of the PIN proteins is an active area of research.

How does auxin achieve its many different effects in the plant? Auxin effects are mediated by two different pathways: immediate, direct effects on the cell and turning on of new patterns of gene expression

Some of the direct effects of auxin may be mediated by its binding to a cell-surface receptor designated ABP1 ("Auxin-binding protein 1").

Effects of auxin on gene expression

This mechanism is another of the many cases in biology where a pathway is turned on by inhibiting the inhibitor of that pathway (a double-negative is a positive). For example, the gibberellins, another group of plant hormones, exert their effects using a similar strategy. The presence in the cell of many different Aux/IAA proteins (29 in Arabidopsis), many different ARFs (23 in Arabidopsis) and several (~4) TIR1-like proteins provides a logical basis for mediating the different auxin effects that I have described. But how this is done remains to be discovered.

2,4-D and its many variants are popular because they are selective herbicides, killing broad-leaved plants but not grasses (no one knows the basis of this selectivity).

Why should a synthetic auxin kill the plant? It turns out that the auxin influx transporter works fine for 2,4-D, but that 2,4-D cannot leave the cell through the efflux transporters. Perhaps it is the resulting accumulation of 2,4-D within the cell that kills it.