Because of their rigid exoskeleton, insects can only grow by periodically shedding their exoskeleton - called molting. Molting occurs repeatedly during larval development. At the final molt, the adult emerges. In several insect orders, notably

the adult looks entirely different from the larva that preceded it. This marked transformation is called complete metamorphosis.

Complete metamorphosis takes place during a seemingly-dormant stage called the pupa. In fact, intense biological activity is going on within the pupal case. The cells of virtually all the differentiated larval structures muscles, salivary glands, gut, etc. die by apoptosis. The nutrients they release are then available for the further development of nests of cells - the imaginal discs - that have been quietly developing within the larval body. Their differentiation produces the structures of the adult - legs, wings, compound eyes, etc.

The sequence ending in the center panel (B) shows the larval, pupal, and adult stages during normal development of the domestic silkworm moth, Bombyx mori.

Molting and pupation require the hormone, PTTH, secreted by a two pairs of cells in the brain of the larva. If these cells are cut out of the brain of a full-grown larva, pupation does not occur. This is not because of the trauma of surgery; if transplanted somewhere else in the caterpillar's body, pupation occurs normally. PTTH is a homodimer of two polypeptides of 109 amino acids. PTTH does not drive pupation directly but, as its name suggests, acts on the prothoracic glands.

There are two prothoracic glands located in the thorax. Under the influence of PTTH, they secrete the steroid hormone ecdysone. Acting together, PTTH and ecdysone trigger every molt: larva-to-larva as well as pupa-to-adult. What, then, accounts for the dramatic changes of metamorphosis?

So if the corpora allata are removed from an immature silkworm, it immediately spins a cocoon and becomes a small pupa. A miniature adult eventually emerges (shown in panel (A) above). Conversely, if the corpora allata of a young silkworm are place in the body of a fully-mature larva, metamorphosis does not occur. The next molt produces an extra-large caterpillar (panel (C) above).

Adult insects do not normally molt, but if extra amounts of PTTH are given to an adult Rhodnius (the "kissing bug"), it is forced into an extra molt. The English insect physiologist V. B. Wigglesworth showed that if juvenile hormone is first applied to the insect's exoskeleton, the regions affected by it revert to larval type after this extra molt. 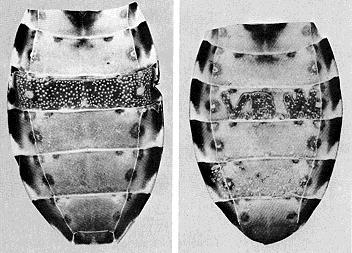 What a beautiful example of the power of a single molecule to unleash a different pattern of gene expression! Presumably, JH interacts with hormone receptors in the cells to produce a new set of transcription factors.

Knowledge of insect hormones has provided a number of opportunities to enlist them or molecules related to them in the battle against insect pests.