Blood is a liquid tissue. Suspended in the watery plasma are seven types of cells and cell fragments.

If one takes a sample of blood, treats it with an agent to prevent clotting, and spins it in a centrifuge, the red cells settle to the bottom and the white cells settle on top of them forming the "buffy coat". The fraction occupied by the red cells is called the hematocrit. Normally it is approximately 45%. Values much lower than this are a sign of anemia

Functions of the blood

The formation of blood cells 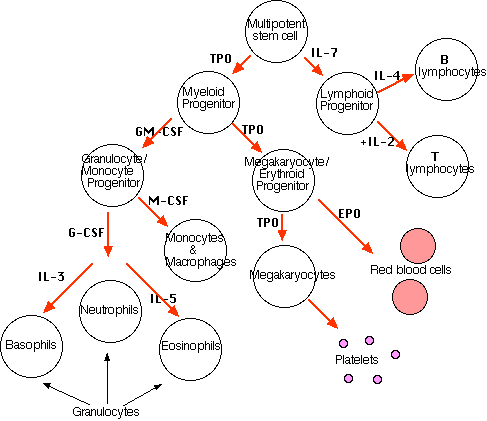 All the various types of blood cells are produced in the bone marrow (some 1011 of them each day in an adult human). They arise from a single type of cell called a hematopoietic stem cell — an "adult" multipotent stem cell. These stem cells are very rare (only about one in 10,000 bone marrow cells) and are attached (probably by adherens junctions) to osteoblasts lining the inner surface of bone cavities. They also express a cell-surface protein designated CD34.

Hematopoietic stem cell produce, by mitosis, two kinds of progeny: (1) more stem cells (A mouse that has had all its blood stem cells killed by a lethal dose of radiation can be saved by the injection of a single living stem cell) and (2) cells that begin to differentiate along the paths leading to the various kinds of blood cells. Which path is taken is regulated by the need for more of that type of blood cell which is, in turn, controlled by appropriate cytokines and/or hormones. For example, Interleukin-7 (IL-7) is the major cytokine in stimulating bone marrow stem cells to start down the "lymphoid" path leading to the various lymphocytes (mostly B cells and T cells).

The most numerous type in the blood. They average 7 µm in diameter. Women average about 4.8 million of these cells per cubic millimeter (mm3; which is the same as a microliter [µl]) of blood. Men average about 5.4 x 106 per µl. These values can vary over quite a range depending on such factors as health and altitude. (Peruvians living at 18,000 feet may have as many as 8.3 x 106 RBCs per µl.)

RBC precursors mature in the bone marrow closely attached to a macrophage. They manufacture hemoglobin until it accounts for some 90% of the dry weight of the cell. In mammals, the nucleus is squeezed out of the cell and is ingested by the macrophage. All the mitochondria as well as the endoplasmic reticulum and Golgi apparatus are destroyed. No-longer-needed proteins are expelled from the cell in vesicles called exosomes. Figure \(\PageIndex{2}\) shows a scanning electron micrograph that shows the characteristic biconcave shape of red blood cells.

Thus RBCs are terminally differentiated; that is, they can never divide. They live about 120 days and then are ingested by phagocytic cells in the liver and spleen. Most of the iron in their hemoglobin is reclaimed for reuse. The remainder of the heme portion of the molecule is degraded into bile pigments and excreted by the liver. Some 3 million RBCs die and are scavenged by the liver each second.

Red blood cells are responsible for the transport of oxygen and carbon dioxide.

To each of these is attached the prosthetic group heme. There is one atom of iron at the center of each heme. One molecule of oxygen can bind to each heme. The reaction is reversible. Under the conditions of lower temperature, higher pH, and increased oxygen pressure in the capillaries of the lungs, the reaction proceeds to the right. The purple-red deoxygenated hemoglobin of the venous blood becomes the bright-red oxyhemoglobin of the arterial blood. Under the conditions of higher temperature, lower pH, and lower oxygen pressure in the tissues, the reverse reaction is promoted and oxyhemoglobin gives up its oxygen. The pressure of oxygen in the lungs is 90–95 torr; in the interior tissues it is about 40 torr. Therefore, only a portion of the oxygen carried by the red blood cells is normally unloaded in the tissues. However, vigorous activity can lower the oxygen pressure in skeletal muscles below 40 torr, which causes a large increase in the amount of oxygen released. This effect is enhanced by the high concentration of carbon dioxide in the muscles and the resulting lower pH (7.2). The lower carbon dioxide concentration (and hence higher pH) at the lungs promotes the binding of oxygen to hemoglobin and hence the uptake of oxygen.

Carbon dioxide (CO2) combines with water forming carbonic acid, which dissociates into a hydrogen ion (H+) and a bicarbonate ion:

95% of the CO2 generated in the tissues is carried in the red blood cells. It enters (and leaves) the cell by diffusion through the plasma membrane. Once inside, about one-half of the CO2 is directly bound to hemoglobin (at a site different from the one that binds oxygen). The rest is converted following the equation above by the enzyme carbonic anhydrase into bicarbonate ions that diffuse back out into the plasma and hydrogen ions (H+) that bind to the protein portion of the hemoglobin (thus having no effect on pH). The bicarbonate ions pass out of the red cell by facilitated diffusion through transmembrane channels in the plasma membrane. Only about 5% of the CO2 generated in the tissues dissolves directly in the plasma. (A good thing, too: if all the CO2 we make were carried this way, the pH of the blood would drop from its normal 7.4 to an instantly-fatal 4.5) When the red cells reach the lungs, these reactions are reversed and CO2 is released to the air of the alveoli.

Anemia is a shortage of RBCs and/or the amount of hemoglobin in them. Anemia has many causes. One of the most common is an inadequate intake of iron in the diet.

Red blood cells have surface antigens that differ between people and that create the so-called blood groups such as the ABO system and the Rh system.

White blood cells are much less numerous than red (the ratio between the two is around 1:700) and have nuclei. They consist of lymphocytes and monocytes with relatively clear cytoplasm, and three types of granulocytes, whose cytoplasm is filled with granules. They participate in protecting the body from infection.

There are several kinds of lymphocytes (although they all look alike under the microscope), each with different functions to perform . The most common types of lymphocytes are:

Although bone marrow is the ultimate source of lymphocytes, the lymphocytes that will become T cells migrate from the bone marrow to the thymus where they mature. Both B cells and T cells also take up residence in lymph nodes, the spleen and other tissues where they encounter antigens, continue to divide by mitosis, mature into fully functional cells.

Monocytes leave the blood and become macrophages and one type of dendritic cell. See Figure 15.3.5.6

The most abundant of the WBCs. This photomicrograph shows a single neutrophil surrounded by red blood cells. Neutrophils squeeze through the capillary walls and into infected tissue where they kill the invaders (e.g., bacteria) and then engulf the remnants by phagocytosis. This is a never-ending task, even in healthy people: Our throat, nasal passages, and colon harbor vast numbers of bacteria. Most of these are commensals, and do us no harm. But that is because neutrophils keep them in check.

However heavy doses of radiation, chemotherapy and many other forms of stress can reduce the numbers of neutrophils so that formerly harmless bacteria begin to proliferate. The resulting opportunistic infection can be life-threatening.

The number of eosinophils in the blood is normally quite low (0–450/µl). However, their numbers increase sharply in certain diseases, especially infections by parasitic worms. Eosinophils are cytotoxic, releasing the contents of their granules on the invader.

Ordinarily representing less than 1% of the WBCs, their numbers also increase during infection. Basophils leave the blood and accumulate at the site of infection or other inflammation. There they discharge the contents of their granules, releasing a variety of mediators such as histamine, serotonin, prostaglandins and leukotrienes which increase the blood flow to the area and in other ways add to the inflammatory process. The mediators released by basophils also play an important part in some allergic responses such as hay fever and an anaphylactic response to insect stings.

Platelets are cell fragments produced from megakaryocytes. These polyploid (128n) cells in the bone marrow send pseudopodia-like projections into the lumen of adjacent blood vessels. Blood flowing through the vessel shears off the platelets. Blood normally contains 150,000–400,000 per microliter (µl) or cubic millimeter (mm3). This number is normally maintained by a homeostatic (negative-feedback) mechanism. If this value should drop much below 20,000/µl, there is a danger of uncontrolled bleeding. Some causes include certain drugs and herbal remedies as well as autoimmunity.

When blood vessels are cut or damaged, the loss of blood from the system must be stopped before shock and possible death occur. This is accomplished by solidification of the blood, a process called coagulation or clotting. A blood clot consists of a plug of platelets enmeshed in a network of insoluble fibrin molecules. Platelets also promote inflammation.

Plasma is the straw-colored liquid in which the blood cells are suspended.

Plasma transports materials needed by cells and materials that must be removed from cells:

to places ("sinks") where they will be removed from the blood.

Proteins make up 6–8% of the blood. They are about equally divided between serum albumin and a great variety of serum globulins. After blood is withdrawn from a vein and allowed to clot, the clot slowly shrinks. As it does so, a clear fluid called serum is squeezed out. Thus Serum is blood plasma without fibrinogen and other clotting factors. The serum proteins can be separated by electrophoresis. 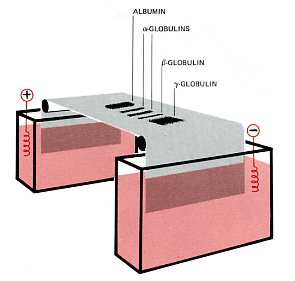 If a precursor of an antibody-secreting cell becomes cancerous, it divides uncontrollably to generate a clone of plasma cells secreting a single kind of antibody molecule.

The above image shows — from left to right — the electrophoretic separation of:

Because of their relationship to cardiovascular disease, the analysis of serum lipids has become an important health measure. The table shows the range of typical values as well as the values above (or below) which the subject may be at increased risk of developing atherosclerosis.

Ensuring the safety of donated blood

A variety of infectious agents can be present in blood. Infections such as

These could be transmitted to recipients. To minimize these risks donors are questioned about their possible exposure to these agents. Each unit of blood is tested for a variety of infectious agents. Most of these tests are performed with enzyme immunoassays (EIA) and detect antibodies against the agents. However, it takes a period of time for the immune system to produce antibodies following infection, and during this period ("window"), infectious virus is present in the blood. For this reason, blood is now also checked for the presence of the RNA of these RNA viruses HIV-1, hepatitis C and West Nile virus by the nucleic acid-amplification test (NAT).

Thanks to all these precautions, the risk of acquiring an infection from any of these agents is vanishingly small. Despite this, some people — in anticipation of need — donate their own blood ("autologous blood donation") prior to surgery.

Donated blood must also be tested for certain cell-surface antigens that might cause a dangerous transfusion reaction in an improperly-matched recipient.

Years of research have gone into trying to avoid the problems of blood perishability and safety by developing blood substitutes. Most of these have focused on materials that will transport adequate amounts of oxygen to the tissues.

Although some have reached clinical testing, none has as yet proved acceptable for routine use.