A typical plant cell (e.g., in the palisade layer of a leaf) might contain as many as 50 chloroplasts.

The chloroplast is made up of 3 types of membrane:

The thylakoid membranes enclose a lumen: a system of vesicles (that may all be interconnected). At various places within the chloroplast these are stacked in arrays called grana (resembling a stack of coins). Four types of protein assemblies are embedded in the thylakoid membranes: These carry out the so-called light reactions of photosynthesis including:

The thylakoid membranes are surrounded by a fluid stroma, which contains all the enzymes, e.g., RUBISCO, needed to carry out the "dark" reactions of photosynthesis; that is, the conversion of CO2 into organic molecules like glucose. A number of identical molecules of DNA, each of which carries the complete chloroplast genome. The genes encode some — but not all of the molecules needed for chloroplast function. The others are 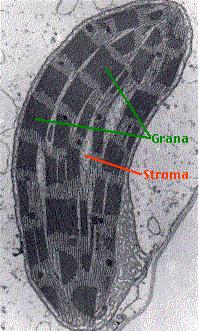 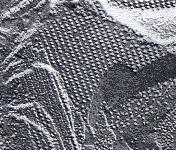 The electron micrograph in Figure 3.17.3 shows the inner surface of a thylakoid membrane. Each particle may represent one photosystem II complex. In the functioning chloroplast, these particles may not be as highly ordered as seen here.