A reminder: mRNA encodes the polypeptide with each amino acid designated by a string of three nucleotides. tRNAs serve as the adaptors to translate from the language of nucleic acids to that of proteins. Ribosomes are the factories for protein synthesis.

1. The transfer RNAs, or tRNAs serve as adaptors to align the appropriate amino acids on the mRNA templates.

b. All tRNAs have the trinucleotide CCA at the 3' end.

3. The secondary structure of tRNA is a cloverleaf

b. Theamino acid acceptor arm is formed by complementary base‑pairing between the intial 7 nts of tRNA and a short segment near the 3' end. Again, the amino acid will be added to the terminal A.

c. The D arm ends in the D loop. It contains several dihydrouridines, which are abbreviated "D".

f. The TyC arm is named for this highly conserved motif found in the loop.

F. The polarity of translation is from the amino (N) terminus to the caboxy (C) terminus.

This was demonstrated in a classic experiment by Dintzis.

b. IF3= Initiation Factor 3

3. Binding of 50S (large) subunit to initiation complex gives a complete ribosome ready for the elongation phase of translation. Note that f-met-tRNAfmet is positioned at the P site. It has recognized the initiator AUG in the mRNA.

4. Identification of initiator AUG in eukaryotes

a. Bases around AUG influence efficiency of initiation.

(1) The mRNA is "prepared" for binding to the ribosome by the action of eukaryotic initiation factor 4, abbreviated eIF4 (Figure 3.5.16). eIF4 is a multisubunit factor; it includes a cap‑binding protein, eIF4F, that recognizes the 5' cap structure. It also includes proteins eIF4A and eIF4B. These are RNA helicases, which unwind secondary structures in the 5' untranslated region of the mRNA at the expense of ATP hydrolysis.

eIF3 keeps the small ribosomal subunit apart from the large subunit during the process of binding the mRNA.

(2) The small subunit, with associated factors, scans along the mRNA until it reaches (usually) the first AUG. Factors eIF1 and eIF1A help move the preinitiation complex to the AUG start.

H. The elongation cycle during translation

1. Binding of aminoacyl‑tRNA to the A site (4) EF‑Tu is one of the most abundant proteins in E. coli, at 70,000 copies per cell. This is almost equal to the number of aminoacyl‑tRNAs per cell, so most of the aminoacyl‑tRNAs are likely to be in the ternary complex when the concentration of GTP is sufficiently high.

d. The antibiotic kirromycin prevents release of EF‑Tu‑GDP, thereby blocking elongation. This demonstrates that one step must be completed before the next can take place, and illustrates the importance of the EF‑Tu‑GTP/GDP cycle. 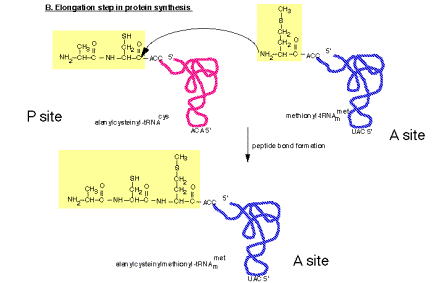 b. Role of rRNA in catalysis

It is likely that rRNA provides the catalytic center for the peptidyl transferase activity, with perhaps some ribosomal proteins aiding in holding the rRNA in the correct conformation for catalysis. This conclusion is supported by several lines of investigation, some of which are listed below.

a. The translocation step moves the ribosome another 3 nucleotides downstream (one codon) and moves peptidyl‑tRNA to the P site (position n), deacylated tRNA exits through the E site, and the A site (position n+1) is vacant for another round of elongation.

c. Hydrolysis of GTP is required for dissociation of EF‑G after translocation. The GTPase is part of the ribosome, not EF-G. d. Action of fusidic acid revealed the need for release of EF‑G‑GDP. In the presence of fusidic acid, EF‑G‑GTP binds the ribosome, GTP is hydrolyzed, and the ribosome moves three nucleotides. But the ribosome‑EF‑G‑GDP complex is stabilized by this compound, and translation is halted. c. The "down side" to nonsense suppression is that the suppressor tRNA can act at any amber codon, Therefore it competes with the releasing factors in recognizing the normal termination codons. When the suppressor tRNA is used instead of releasing factors, translation proceeds further down the mRNA than it is supposed to, leading to production of aberrant proteins. Suppressor strains of E. colican be pretty sick (i.e. they don't grow as well as wild type strains).

d. Two other amber suppressors are encoded by the supDgene, which encodes a tRNA that will insert Ser at a UAG, and supF, which will insert Tyr.

3. Missense suppressors: These are mutant tRNAs that lead to the insertion of an amino acid that is compatible with the wild type amino acid (altered by the original mutation).

4. Frameshift suppressors: These are mutant tRNAs whose anticodon has been expanded (or contracted?) to match the length‑altering mutation in the mRNA.

A frameshift suppressor would also have an additional C in the anticodon.