Several lines of evidence, primarily from studies of recombination in yeast, required changes to the reciprocal exchange of DNA chains initiated at single-strand nicks. As just mentioned, one DNA duplex tended to be the donor of information and the other the recipient, in contrast to the equal exchange predicted by the original Holliday model. Also, in yeast, recombination could be initiated by double-strand breaks. For instance, both DNA strands are cleaved (by the HO endonuclease) to initiate recombination between the MATand HML(R) loci in mating type switching in yeast. Using plasmids transformed into yeast, it was shown that a double-strand gap in the “aggressor” duplex could be used to initiate recombination, and the gap was repaired during the recombination (this experiment is explored in problem 8.___). In this case, the gap in one duplex was filled by DNA donated from the other substrate. All this evidence was incorporated into a major new model for recombination from Jack Szostak and colleagues in 1983. It is called the double-strand-break model. New features in this model (contrasting with the Holliday model) are initiation at double-strand breaks, nuclease digestion of the aggressor duplex, new synthesis and gap repair. However, the fundamental Holliday junction, branch migration and resolution are retained, albeit with somewhat greater complexity because of the additional numbers of Holliday junctions. Although many aspects of the recombination mechanism differ

The steps in the double-strand-break model up to the formation of the joint molecules are diagrammed in Figure 8.9. 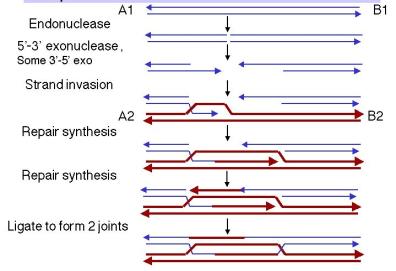 Figure 8.9. Steps in the double-strand-break model for recombination, from initiation to formation of the recombinant joints.

The recombination intermediate can now be resolved. The presence of two recombination joints adds some complexity, but the process is essentially the same as discussed for the Holliday model. Each joint can be resolved horizontally or vertically. The key factor is whether the joints are resolved in the same mode or sense (both horizontally or both vertically) or in different modes. Figure 8.10. Resolution of intermediates in the double-strand-break model by cutting the recombinant joints in the same mode or sense. The box outlines the region between the two resolved junctions.

In contrast, if each joint is resolved in opposite directions (Figure 8.11), then there will be recombination between flanking markers. That is, one joint will not give a crossover and the other one will. Figure 8.11.Resolution of intermediates in the double-strand-break model by cutting the recombinant joints in the opposite mode or sense.

Several features distinguish the double-strand-break model from the single-strand nick model initially proposed by Holliday. In the double-strand-break model, the region corresponding to the original gap now has the sequence of the donor duplex in both molecules. This is flanked by heteroduplexes at each end, one on each duplex. Hence the arrangement of heteroduplex is asymmetric; i.e. there is a different heteroduplex in each duplex molecule. Part of one duplex molecule has been converted to the sequence of the other (the recipient, initiating duplex has been converted to the sequence of the donor). In the single strand invasion model, each DNA duplex has heteroduplex material covering the region from the initial site of exchange to the migrating branch, i.e. the heteroduplexes are symmetric. In variations of the model (Meselson-Radding) in which some DNA is degraded and re‑synthesized, the initiating chromosome is the donor of the genetic information.

These models also have many important features in common. Steps that are common to all the models include the generation of a single strand of DNA at an end, a search for homology, strand invasion or strand exchange to form a joint molecule, branch migration, and resolution. Enzymes catalyzing each of these steps have been isolated and characterized. This is the topic of the rest of this chapter.