Sequence alteration in the genomic DNA is the fuel driving the course of evolution. Without such mutations, no changes would occur in populations of species to allow them to adapt to changes in the environment. Mutations in the DNA of germline cells fall into three categories with respect to their impact on evolution. Most have no effect on phenotype; these include sequence changes in the large portion of the genome that neither codes for protein, or is involved in gene regulation or any other process. Some of these neutral mutations will become prevalent in a population of organisms (or fixed) over long periods of time by stochastic processes. Other mutations do have a phenotype, one that is advantageous to the individuals carrying it. These mutations are fixed in populations rapidly (i.e. they are subject to positive selection). Other mutations have a detrimental phenotype, and these are cleared from the population quickly. They are subject to negative or purifying selection. 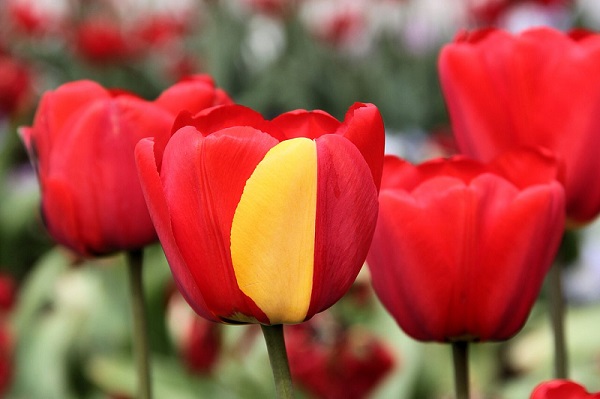 A red Darwin hybrid tulip "Apeldoorn" with a mutation that resulted in half of a petal being yellow. (CC BY-SA 3.0; LepoRello).

Whether a mutation is neutral, disadvantageous or useful is determined by where it is in the genome, what the type of change is, and the particulars of the environmental forces operating on the locus. For our purposes, it is important to realize that sequence changes are a natural part of DNA metabolism. However, the amount and types of mutations that accumulate in a genome are determined by the types and concentrations of mutagens to which a cell or organism is exposed, the efficiency of relevant repair processes, and the effect on phenotype in the organism.