The word “epigenetics” has become popular in the last decade and its meaning has become confused. The term epigenetics describes any heritable change in phenotype that is not associated with a change the chromosomal DNA sequence.

Originally it meant the processes through which the genes were expressed to give the phenotype; that is, the changes in gene expression that occur during normal development of multicellular organisms. This includes the change in transcriptional state of a DNA sequence (gene) via DNA or chromatin protein reversible modifications. Thus, DNA methylation and chromatin protein methylation, phosphorylation, and acetylation have been targeted as mechanisms for “heritable” changes in cells as they grow from a single cell (zygote) and differentiate to a multicellular organism. Here, dividing cells commit to differentiate into different tissues such as muscle, neuron, and fibroblast due to the genes that they express or silence. Some genes are irreversibly silenced, through epigenetic mechanisms, in some cell types, but not in others. This doesn’t involve any change in DNA sequence.

Epigenetics describes any heritable change in phenotype that is not associated with a change the chromosomal DNA sequence.

12.6.1 Some heritable information can be passed on independent of the DNA sequence

More recently however, researchers have found many cases of environmentally induced changes in gene expression that can be passed on to subsequent generations – a multi-generational effect. These cases have also been called “epigenetics”, and probably involve similar reversible changes to the DNA and chromatin proteins.These altered expression patterns represent the diversity of expression for a genome. This “extended” phenotype, the ability to influence traits in the next generation, is a topic of current research and only some examples will be discussed here.

One example comes from the grandchildren of famine victims are known to have lower birth weight than children without a family history of famine. This heritability of altered state of gene expression is surprising, since it appears not to involve typical changes in the sequence of DNA.The term epigenetics is applied here since the apparently heritable change in phenotype is associated with something other than chromosomal DNA sequence.

This change is inherited from one generation to the next and is thus transgenerational. In develpmental epigenetics, the expression state (developmentally differentiated state) is conserved only from one mitosis to the next, but is erased or rest at meiosis (the boundary of one generation to the next). The basis of at least some types of epigenetic inheritance appears to be replication of patterns of histone and DNA methylation that occurs in parallel with the replication of the primary DNA sequence. It is becoming clear that epigenetics is an important part of biology, and can serve as a type of cellular memory, sometimes within an individual, or sometimes across a few generations, at least.

The permanence of this “change” is not the same as changes in the DNA sequence itself. What is clear is that epigenetics is an important part of regulating gene expression, and can serve as a type of cellular memory, certainly within an individual, or across a few generations in some cases.

For some genes, the allele inherited from the female parent is expressed differently than the allele that is inherited from the male parent. This is distinct from sex-linkage and is true even if both alleles are wild-type and autosomal.During gamete development (gametogenesis), each parent imprints epigenetic information on some genes that will affect the activity of the gene in the offspring.Imprinting does not change the DNA sequence, but does involve methylation of DNA and histones, and generally silences the expression of one of the parent’s alleles. In humans, some genes are expressed only from the paternal allele, and other genes are expressed only from the maternal allele. The imprinting marks are reprogrammed before the next generation of gametes are formed. Thus, although a male inherits epigenetic information from both his mother and father, this information is erased before sperm development, and he passes only one pattern of imprinting to both his sons and daughters. Most examples of imprinting come from placental mammals, and many imprinted genes control growth rate, such as IGF2 (insulin-like growth factor 2).

Imprinting appears to explain many different parent-of-origin effects. For example, Prader-Willi Syndrome (PWS) and Angelman Syndrome (AS) are two phenotypically different conditions in humans that result from deletion of a specific region of chromosome 15, which contains several genes. Whether the deletion results in PWS or in AS depends on the parent-of-origin. If the deletion is inherited from the father, PWS results.Conversely, if the deletion is inherited from the mother, AS is the result. The gene(s) involved in PWS is maternally silenced by imprinting, therefore the deletion of its paternally-inherited allele results in a complete deficiency of a required protein.On the other hand, the paternal allele of the gene involved in AS is silenced by imprinting, so deletion of the maternal allele results in deficiency of the protein encoded by that gene.

Nutrition is one aspect of the environment that has been particularly well-studied from an epigenetic perspective in both mice and humans. People alive today who experienced the Dutch famine of 1944-1945 as fetuses have IGF2 genes that are less-methylated than their siblings. Methylation of IGF2 (and birth rate) is also lower in children of mothers who do not take folic acid supplements as compared those who do.Furthermore, an individual’s phenotype can be influenced by the nutrition of parents or even grandparents.This transgenerational inheritance of nutritional effects appears to involve epigenetic mechanisms.

The mouse agouti gene produces a signaling molecule that regulates pigment-producing cells and brain cells that affect feeding and body weight. Normally, agouti is silenced by methylation, and these mice are brown and have a normal weight. When agouti is demethylated by feeding certain chemicals or by mutating a gene that controls methylation, some mice become yellow and overweight, although their DNA sequence remains unchanged.Methylation of agouti and normal weight and pigmentation of offspring can be restored if their mothers are fed folic acid and other vitamins during pregnancy.

A study of an isolated Swedish village called Överkalix provides an example of transgenerational inheritance of nutritional factors. Detailed historical records allowed researchers to infer the nutritional status of villagers going back to 1890.The researchers then studied the health of two generations of these villagers’ offspring, using medical records. A significant correlation was found between the mortality risk of grandsons and the food availability of their paternal grandfathers.This effect was not seen in the granddaughters. Furthermore, the nutrition of paternal grandmothers, or either of the maternal grandparents did not affect the health of the grandsons. It was therefore proposed that epigenetic information affecting health (specifically diabetes and heart disease) was passed from the grandfathers, to the grandsons, through the male line.

12.6.4 Vernalization as an example of epigenetics

Many plant species in temperate regions are winter annuals, meaning that their seeds germinate in the late summer, and grow vegetatively through early fall before entering a dormant phase during the winter, often under a cover of snow. In the spring, the plant resumes growth and is able to produce seeds before other species that germinated in the spring. In order for this life strategy to work, the winter annual must not resume growth or start flower production until winter has ended. Vernalization is the name given to the requirement to experience a long period of cold temperatures prior to flowering.

How does a plant sense that winter has passed? The signal for resuming growth cannot simply be warm air temperature, since occasional warm days, followed by long periods of freezing, are common in temperate climates. Researchers have discovered that winter annuals use epigenetic mechanisms to sense and “remember” that winter has occurred

Fortunately for the researchers who were interested in vernalization, some varieties of Arabidopsis are winter annuals. Through mutational analysis of Arabidopsis, researchers found that a gene called FLC (FLOWERING LOCUS C) encodes a transcription repressor acting on several of the genes involved in early stages of flowering (Figure 12.16).In the fall and under other warm conditions, the histones associated with FLC are acetylated and so FLC is transcribed at high levels; expression of flowering genes is therefore entirely repressed. However, in response to cold temperatures, enzymes gradually deacetylate the histones associated with FLC. The longer the cold temperatures persist, the more acetyl groups are removed from the FLC-associated histones, until finally the FLC locus is no longer transcribed and the flowering genes are free to respond to other environmental and hormonal signals that induce flowering later in the spring. Because the deacetylated state of FLC is inherited as cells divide and the plant grows in the early spring, this is an example of a type of cellular memory mediated by an epigenetic mechanism. 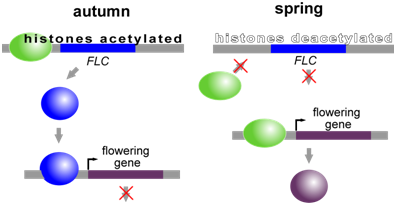 Figure 12.18: In the autumn, histones associated with FLC are acetylated, allowing this repressor of flowering genes to be expressed. During winter, enzymes progressive deacetylate FLC, preventing it from being expressed, and therefore allowing flowering genes to respond to other signals that induce flowering. (Origianl-Deyholos-CC:AN)