Mutations can occur in both cis-elements and trans-factors; both can result in altered patterns of gene expression. If an altered pattern of gene expression results in a selective advantage (or at least do not produce a major disadvantage), they may be selected and maintained in future populations. They may even contribute to the evolution of new species. An example of a sequence change in an enhancer is found in the Pitx gene.

The three-spined stickleback (Figure 12.11) provides an example of natural selection of a mutation in a cis-regulatory element. This fish occurs in two forms: (1) populations that inhabit deep, open water and have a spiny pelvic fin that deters larger predator fish from feeding on them; (2) populations from shallow water environments and lack this spiny pelvic fin. In shallow water, it appears that a long, spiny pelvic fin would be a disadvantage because it frequently contacts the sediment at the bottom of the pond and allows parasitic insects in the sediment to invade the stickleback. Researchers compared gene sequences of individuals from both deep and shallow water environments as shown in Figure 12.11. They observed that in embryos from the deep-water population, a gene called Pitx was expressed in several groups of cells, including those that developed into the pelvic fin. Embryos from the shallow-water population expressed Pitx in the same groups of cells as the other population, with an important exception: Pitx was not expressed in the pelvic fin primordium in the shallow-water population. Further genetic analysis showed that the absence of Pitx gene expression from the developing pelvic fin of shallow-water stickleback was due to the absence (mutation) of a particular enhancer element upstream of Pitx.

Figure 12.11: Development of a large, spiny pelvic fin in deep-water stickleback (left) depends on the presence of a particular enhancer element upstream of a gene called Pitx. Mutants lacking this element, and therefore the large pelvic fin (right), have been selected for in shallow-water environments. (Wikipedia-Richard Wheeler-GFDL)

Hemoglobin is the oxygen-carrying component of red blood cells (erythrocytes). Hemoglobin usually exists as tetramers of four non-covalently bound hemoglobin molecules (Fig 12.12). Each hemoglobin molecule consists of a globin polypeptide with a covalently attached heme molecule. Heme is made through a specialized metabolic pathway and is then bound to globin polypeptide through post-translational modification. 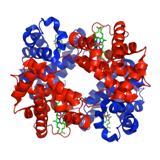 The composition of the tetramers changes during development (Figure 12.13). From early childhood onward, most tetramers are of the type \(\mathbf{\alpha}\)2\(\mathbf{\beta}\)2, which means they contain of two copies of each of two slightly different globin proteins named \(\alpha\) and \(\beta\). A small amount of adult hemoglobin is \(\alpha\)2\(\delta\)2, which has \(\delta\) globin instead of the more common \(\beta\) globin. Other tetrameric combinations predominate before birth: \(\zeta\)2\(\varepsilon\)2 is most abundant in embryos, and \(\alpha\)2\(\gamma\)2 is most abundant in fetuses. Although the six globin proteins (\(\alpha\) = alpha, \(\beta\) = beta , \(\gamma\) = gamma, \(\delta\) =delta, \(\varepsilon\) =epsilon , \(\zeta\) = zeta) are very similar to each other, they do have slightly different functional properties. For example, fetal hemoglobin has a higher oxygen affinity than adult hemoglobin, allowing the fetus to more effectively extract oxygen from maternal blood. The specialized \(\gamma\) globin genes that are characteristic of fetal hemoglobin are found only in placental mammals. Figure 12.13: Expression of globin genes during prenatal and postnatal development in humans. The organs in which globin genes are primarily expressed at each developmental stage are also indicated. (Origianl-Deyholos-CC:AN)

Each of these globin polypeptides is encoded by a different gene. In humans, globin genes are located in clusters on two chromosomes (Figure 12.14). We can infer that these clusters arose through a series of duplications of an ancestral globin gene. Gene duplication events can occur through rare errors in processes such as DNA replication, meiosis, or transposition. The duplicated genes can accumulate mutations independently of each other. Mutations can occur in either the regulatory regions (e.g. promoter regions), or in the coding regions, or both. In this way, the promoters of globin genes have evolved to be expressed at different phases of development, and to produce proteins optimized for the prenatal environment.

Figure 12.14: Fragments of human chromosome 11 and human chromosome 16 on which are located clusters of \(\beta\)-like and \(\alpha\)-like goblin genes, respectively. Additional globin genes (\(\theta\), \(\mu\)) have also been described by some researchers, but are not shown here. (Origianl-Deyholos-CC:AN)

Of course, not all mutations are beneficial: some mutations can lead to inactivation of one or more of the products of a gene duplication. This can produce what is called a pseudogene. Examples of pseudogenes (\(\psi\)) are also found in the globin clusters. Pseudogenes have mutations that prevent them from being expressed at all. The globin genes provide an example of how gene duplication and mutation, followed by selection, allows genes to evolve specialized expression patterns and functions. Many genes have evolved as gene families in this way, although they are not always clustered together as are the globins.