Most of the phenotypic traits commonly used in introductory genetics are qualitative, meaning that the phenotype exists in only two (or possibly a few more) discrete, alternative forms, such as either purple or white flowers, or red or white eyes. These qualitative traits are therefore said to exhibit discrete variation. On the other hand, many interesting and important traits exhibit continuous variation; these exhibit a continuous range of phenotypes that are usually measured quantitatively, such as intelligence, body mass, blood pressure in animals (including humans), and yield, water use, or vitamin content in crops. Traits with continuous variation are often complex, and do not show the simple Mendelian segregation ratios (e.g. 3:1) observed with some qualitative traits. Many complex traits are also influenced heavily by the environment. Nevertheless, complex traits can often be shown to have a component that is heritable, and which must therefore involve one or more genes.

How can genes, which are inherited (in the case of a diploid) as at most two variants each, explain the wide range of continuous variation observed for many traits? The lack of an immediately obvious explanation to this question was one of the early objections to Mendel's explanation of the mechanisms of heredity. However, upon further consideration, it becomes clear that the more loci that contribute to trait, the more phenotypic classes may be observed for that trait (Figure 10.6). Figure 10.6: Punnett Squares for one, two, or three loci. We are using a simplified example of up to three semi-dominant genes, and in each case the effect on the phenotype is additive, meaning the more “upper case” alleles present, the stronger the phenotype. Comparison of the Punnett Squares and the associated phenotypes shows that under these conditions, the larger the number of genes that affect a trait, the more intermediate phenotypic classes that will be expected. (Original-Deyholos-CC:AN)

If the number of phenotypic classes is sufficiently large (as with three or more loci), individual classes may become indistinguishable from each other (particularly when environmental effects are included), and the phenotype appears as a continuous variation (Figure 10.7). Thus, quantitative traits are sometimes called polygenic traits, because it is assumed that their phenotypes are controlled by the combined activity of many genes. Note that this does not imply that each of the individual genes has an equal influence on a polygenic trait – some may have major effect, while others only minor. Furthermore, any single gene may influence more than one trait, whether these traits are quantitative or qualitative traits.

We can use molecular markers to identify at least some of the genes (those with a major influence) that affect a given quantitative trait. This is essentially an extension of the mapping techniques we have already considered for discrete traits. A QTL mapping experiment will ideally start with two pure-breeding lines that differ greatly from each other in respect to one or more quantitative traits (Figure 10.8). The parents and all of their progeny should be raised under as close to the same environmental conditions as possible, to ensure that observed variation is due to genetic rather than external environmental factors. These parental lines must also be polymorphic for a large number of molecular loci, meaning that they must have different alleles from each other at hundreds of loci. The parental lines are crossed, and then this F1 individual, in which recombination between parental chromosomes has occurred is self-fertilized (or back-crossed). Because of recombination (both crossing over and independent assortment), each of the F2 individuals will contain a different combination of molecular markers, and also a different combination of alleles for the genes that control the quantitative trait of interest (Table 10.1). By comparing the molecular marker genotypes of several hundred F2 individuals with their quantitative phenotypes, a researcher can identify molecular markers for which the presence of particular alleles is always associated with extreme values of the trait. In this way, regions of chromosomes that contain genes that contribute to quantitative traits can be identified. (Figure 10.9) It then takes much more work (further mapping and other experimentation) to identify the individual genes in each of the regions that control the quantitative trait. 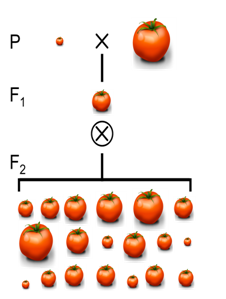 Figure 10.8: Strategy for a typical QTL mapping experiment. Two parents that differ in a quantitative trait (e.g. fruit mass) are crossed, and the F1 is self-fertilized (as shown by the cross-in-circle symbol). The F2 progeny will show a range of quantitative values for the trait. The task is then to identify alleles of markers from one parent that are strongly correlated with the quantitative trait. For example, markers from the large-fruit parent that are always present in large-fruit F2 individuals (but never in small-fruit individuals) are likely linked to loci that control fruit mass.