Several characteristics of molecular markers make them useful to geneticists. First, because of the way DNA polymorphisms arise and are retained, they are frequent throughout the genome. Second, because they are phenotypically neutral, it is relatively easy to find markers that differ between two individuals. Third, their neutrality also makes it possible to study hundreds of loci without worrying about gene interactions or other influences that make it difficult to infer genotype from phenotype. Lastly, unlike visible traits such as eye color or petal color, the phenotype of a molecular marker can be detected in any tissue or developmental stage, and the same type of assay can be used to score molecular phenotypes at millions of different loci. Thus, the neutrality, high density, high degree of polymorphism, co-dominance, and ease of detection of molecular markers has lead to their wide adoption in many areas of research.

It is worth emphasizing again that DNA polymorphisms are a natural part of most genomes. Geneticists discover these polymorphisms in various ways, including comparison of random DNA sequence fragments from several individuals in a population. Once molecular markers have been identified, they can be used in many ways, including:

By comparing the allelic genotypes at multiple molecular marker loci, it is possible to determine the likelihood of similarity between two DNA samples. If markers differ, then clearly the DNA is from different sources. If they don’t differ, then one can estimate the unlikelihood of them coming from different sources – eg they are from the same source. For example, a forensic scientist can demonstrate that a blood sample found on a weapon came from a particular suspect. Similarly, that leaves in the back of a suspect's pick-up truck came from a particular tree at a crime scene. DNA fingerprinting is also useful in paternity testing (Figure 10.4) and in commercial applications such as verification of species of origin of certain foods and herbal products. Figure 10.4: Paternity testing. Given the molecular phenotype of the child (C) and mother (M), only one of the possible fathers (#2) has alleles that are consistent with the child’s phenotype.
(Original-Deyholos-CC:AN)

By calculating the recombination frequency between pairs of molecular markers, a map of each chromosome can be generated for almost any organism (Figure 10.5). These maps are calculated using the same mapping techniques described for genes in Chapter 7, however, the high density and ease with which molecular markers can be genotyped makes them more useful than other phenotypes for constructing genetic maps. These maps are useful in further studies, including map-based cloning of protein coding genes that were identified by mutation. 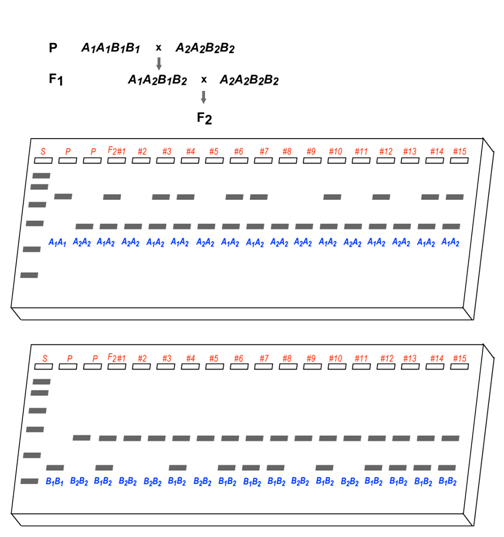 Figure 10.5: Measuring recombination frequency between two molecular marker loci, A and B. A different pair of primers is used to amplify DNA from either parent (P) and 15 of the F2 offspring from the cross shown. Recombinant progeny will have the genotype A1A2B2B2 or A2A2B1B2. Individuals #3, #8, #13 are recombinant, so the recombination frequency is 3/15=20%. (Original-Deyholos-CC:AN)

As described in Chapter 5, the observed frequency of alleles, including alleles of molecular markers, can be compared to frequencies expected for populations in Hardy-Weinberg equilibrium to determine whether the population is in equilibrium. By monitoring molecular markers, ecologists and wildlife biologists can make inferences about migration, selection, diversity, and other population-level parameters.

Molecular markers can also be used by anthropologists to study migration events in human ancestry. There is a large commercial business available that will genotype people and determine their deep genetic heritage for ~$100. This can be examined through the maternal line via sequencing their mitochondrial genome and through the paternal line via genotyping their Y-chromosome.

For example, about 8% of the men in parts of Asia (about 0.5% of the men in the world) have a Y-chromosomal lineage belonging to Genghis Khan (the haplogroup C3) and his decendents.

It is often possible to correlate, or link, an allele of a molecular marker with a particular disease or other trait of interest. One way to make this correlation is to obtain genomic DNA samples from hundreds of individuals with a particular disease, as well as samples from a control population of healthy individuals. The genotype of each individual is scored at hundreds or thousands of molecular marker loci (e.g. SNPs), to find alleles that are usually present in persons with the disease, but not in healthy subjects. The molecular marker is presumed to be tightly linked to the gene that causes the disease, although this protein-coding gene may itself be as yet unknown. The presence of a particular molecular polymorphism may therefore be used to diagnose a disease, or to advise an individual of susceptibility to a disease.

Molecular markers may also be used in a similar way in agriculture to track desired traits. For example, markers can be identified by screening both the traits and molecular marker genotypes of hundreds of individuals. Markers that are linked to desirable traits can then be used during breeding to select varieties with economically useful combinations of traits, even when the genes underlying the traits are not known.

Molecular markers can be used to identify multiple different regions of chromosomes that contain genes that act together to produce complex traits. This process involves finding combinations of alleles of molecular markers that are correlated with a quantitative phenotype such as body mass, height, or intelligence. QTL mapping is described in more detail in the following section.