Regardless of their origins, molecular markers can be classified as polymorphisms that either vary in the length of a DNA sequence, or vary only in the identity of nucleotides at a particular position on a chromosome (Figure 10.2). In both cases, because two or more alternative versions of the DNA sequence exist, we can treat each variant as a different allele of a single locus. Each allele gives a different molecular phenotype. For example, polymorphisms of SSRs (short sequence repeats) can be distinguished based on the length of PCR products: one allele of a particular SSR locus might produce a 100bp band, while the same primers used with a different allele as a template might produce a 120bp band (Figure 10.3). A different type of marker, called a SNP (single nucleotide polymorphism), is an example of polymorphism that varies in nucleotide identity, but not length. SNPs are the most common of any molecular markers, and the genotypes of thousands of SNP loci can be determined in parallel, using new, hybridization based instruments. Note that the alleles of most molecular markers are co-dominant, since it is possible to distinguish the molecular phenotype of a heterozygote from either homozygote. 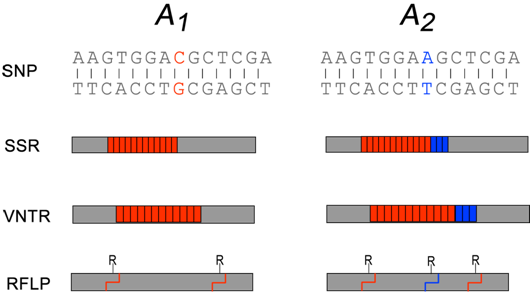 Mutations that do not affect the function of protein sequences or gene expression are likely to persist in a population as polymorphisms, since there will be no selection either in favor or against them (i.e. they are neutral). Note that the although the rate of spontaneous mutation in natural populations is sufficiently high so as to generate millions of polymorphisms that accumulate over thousands of generations, the rate of mutation is on the other hand sufficiently low that existing polymorphisms are stable throughout the few generations we study in a typical genetic experiment.