The phenotypes described thus far have a nearly perfect correlation with their associated genotypes; in other words an individual with a particular genotype always has the expected phenotype. However, many phenotypes are not determined entirely by genotype alone. They are instead determined by an interaction between genotype and non-genetic, environmental factors and can be conceptualized in the following relationship:

This interaction is especially relevant in the study of economically important phenotypes, such as human diseases or agricultural productivity. For example, a particular genotype may pre-dispose an individual to cancer, but cancer may only develop if the individual is exposed to certain DNA-damaging chemicals. Therefore, not all individuals with the particular genotype will develop the cancer phenotype.

The terms penetrance and expressivity are also useful to describe the relationship between certain genotypes and their phenotypes. 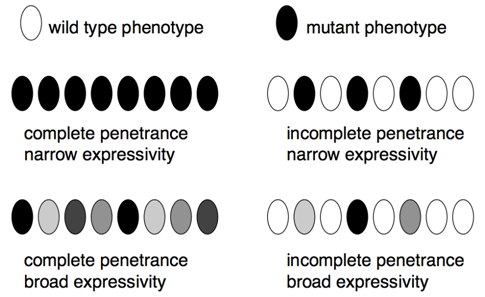