If you refer back to Figure \(\PageIndex{15}\) you can see that humans, like most animals and most eukaryotic genetic model organisms, have two copies of each autosome. This situation is called diploidy. This means that most of their cells have two homologous copies of each chromosome. In contrast, many plant species and even a few animal species are polyploids. This means they have more than two chromosome sets, and so have more than two homologs of each chromosome in each cell.

When the nuclear content changes by a whole chromosome set we call it a change in ploidy. Gametes are haploid (1n) and thus most animals are diploid (2n), formed by the fusion of two haploid gametes. However, some species can exist as monoploid (1x), triploid (3x), tetraploid (4x), pentaploid (5x), hexaploid (6x), or higher.

When describing polyploids, we use the letter “x” (not “n”) to define the level of ploidy. A diploid is 2x, because there are two basic sets of chromosomes, and a tetraploid is 4x, because it contains four chromosome sets. For clarity when discussing polyploids, geneticists will often combine the “x” notation with the “n” notation already defined previously in this chapter. Thus for both diploids and polyploids, “n” is the number of chromosomes in a gamete, and “2n” is the number of chromosomes following fertilization. For a diploid, therefore, n=x, and 2n=2x. But for a tetraploid, n=2x, and 2n=4x and for a hexaploid, n=3x, and 2n=6x.

Monoploids, with only one set, are usually inviable in most species, however, in many species of hymenoptera (bees, wasps, ants) the males are monoploid and develop from unfertilized eggs. These males don’t undergo meiosis for gametes; mitosis produces sperm. Females are diploid (from fertilized eggs) and produce eggs via meiosis. This is the basis for the haploid-diploid sex determination system (not the X/Y chromosome system). Female bees are diploid (2n=32) and are formed when an egg (n=16) is fertilized by a sperm (n=16). If an egg isn't fertilized it can still develop and the result is a n=16 male drone. Males are described as haploid (because they have the same number of chromosomes as a gamete) or monoploid (because they have only one chromosome set). Females produce eggs by meiosis while males produce sperm by mitosis. This form of sex determination produces more females – workers, which do the work (Figure 2-18) than males, who are only needed for reproduction. 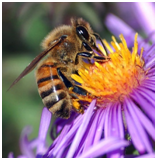 Polyploids can be stable or sterile

Like diploids (2n=2x), stable polyploids generally have an even number of copies of each chromosome: tetraploid (2n=4x), hexaploid (2n=6x), and so on. The reason for this is clear from a consideration of meiosis. Remembering that the purpose of meiosis is to reduce the sum of the genetic material by half, meiosis can equally divide an even number of chromosome sets, but not an odd number. Thus, polyploids with an odd number of chromosomes (e.g. triploids, 2n=3x) tend to be sterile, even if they are otherwise healthy.

The mechanism of meiosis in stable polyploids is essentially the same as in diploids: during metaphase I, homologous chromosomes pair with each other. Depending on the species, all of the homologs may be aligned together at metaphase, or in multiple separate pairs. For example, in a tetraploid, some species may form tetravalents in which the four homologs from each chromosome align together, or alternatively, two pairs of homologs may form two bivalents. Note that because that mitosis does not involve any pairing of homologous chromosomes, mitosis is equally effective in diploids, even-number polyploids, and odd-number polyploids.

Many Crop Plants are Hexaploid or Octoploid

Polyploid plants tend to be larger and healthier than their diploid counterparts. The strawberries sold in grocery stores come from octoploid (8x) strains and are much larger than the strawberries formed by wild diploid strains. An example is bread wheat which is a hexaploid (6x) strain. This species is derived from the combination of three other wheat species, T. monococcum (chromosome sets = AA), T. searsii (BB), and T. tauschii (DD). Each of these chromosome sets has 7 chromosomes so the diploid species are 2n=2x=14 and bread wheat is 2n=6x=42 and has the chromosome sets AABBDD. Bread wheat is viable because each chromosome behaves independently during mitosis. The species is also fertile because during meiosis I the A chromosomes pair with the other A chromosomes, and so on. Thus, even in a polyploid, homologous chromosomes can segregate equally and gene balance can be maintained.

Bananas, Watermelons, and Other Seedless Plants are Triploid

The bananas found in grocery stores are a seedless variety called Cavendish. They are a triploid variety (chromosome sets = AAA) of a normally diploid species called Musa acuminata (AA). Cavendish plants are viable because mitosis can occur. However they are sterile because the chromosomes cannot pair properly during meiosis I. During prophase I there are three copies of each chromosome trying to “pair” with each other. Because proper chromosome segregation in meiosis fails, seeds cannot be made and the result is a fruit that is easier to eat because there are no seeds to spit out. Seedless watermelons (Figure \(\PageIndex{19}\)) have a similar explanation.

Figure \(\PageIndex{19}\): Seedless watermelon is triploid, with the white, aborted seeds within the flesh. (Flickr-Darwin Bell-CC:AN)

If triploids cannot make seeds, how do we obtain enough triploid individuals for cultivation? The answer depends on the plant species involved. In some cases, such as banana, it is possible to propagate the plant asexually; new progeny can simply be grown from cuttings from a triploid plant. On the other hand, seeds for seedless watermelon are produced sexually: a tetraploid watermelon plant is crossed with a diploid watermelon plant. Both the tetraploid and the diploid are fully fertile, and produce gametes with two (1n=2x) or one (1n=1x) sets of chromosomes, respectively. These gametes fuse to produce a zygote (2n=3x) that is able to develop normally into an adult plant through multiple rounds of mitosis, but is unable to compete normal meiosis or produce seeds.

Polyploids are often larger in size than their diploid relatives (Figure \(\PageIndex{20}\)). This feature is used extensively in food plants. For example, most strawberries you eat are not diploid, but octoploid (8x).

Polyploidy in animals is rare, essentially limited to lower forms, which often reproduce by parthenogenesis.