I first became interested in Developmental Biology while volunteering in a special needs classroom. There I saw a wider variety of human morphology and behavior than I was normally exposed to. At the time, I wondered how these differences came about. This led me to the fields of Genetics and Developmental Biology, I got my start in a Clinical Genetics lab where I assisted in diagnosing genetic disorders. Couples with a familial history of a particular disorder would get a blood draw, we would take the blood, extract DNA, and perform SNP or RFLP testing to genotype it. We would then make a prediction regarding the likelihood that their future child would have or be a carrier of a particular disorder. The lab next to mine studied teratogenesis, or the development of birth disorders. Couples that used that clinical lab came bearing abnormal bloodwork and ultrasounds. Our labs were two sides of the same coin: we were interested in anomalies.

Anomalies refer to anything outside the ordinary, for example conjoined twins or missing limbs. Even though we commonly think of developmental anomalies as inherently "bad", they are not fundamentally so. For example, the average height of an NBA player is 6'7". Although this is anomalous (only 0.045% or one in 2200 American men are this tall or taller), it is not considered at all detrimental to be this tall. If you are a Developmental Biologist, you relish natural variation as a window into developmental processes. For example, you might find out what an NBA player ate growing up, how tall his parents are, if he grew up in a rural area or the city, and compare these data to the data of an average American man. The differences between the two can help you generate hypotheses regarding the developmental processes leading to tall height. 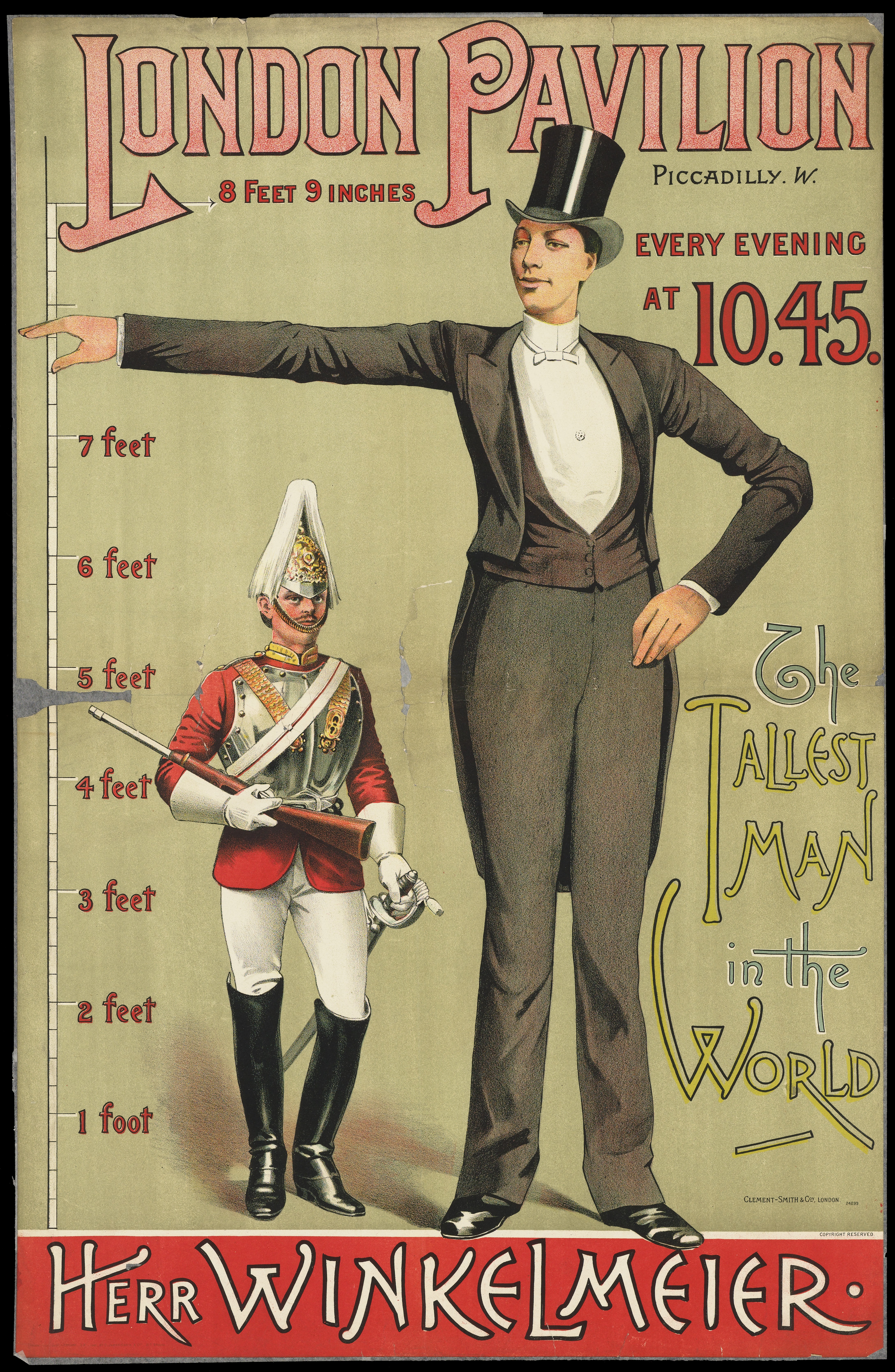 r to the left shows an advertisement for a tall man, Franz Winklemeier, who toured Europe in the 1880s.

Image from Wellcome Images CC BY 4.0

At a deeper level we also notice something more fundamentally interesting about a very tall (or very short) person. Most people who are quite tall or quite short (say a 4'7" woman), have bodily proportions that are nearly the same as someone of average height. For example, their arms aren't placed too low, their neck isn't particularly long, their legs reach all the way to the ground. In short, their body has been "scaled" to a larger or smaller size. This leads us to think that perhaps development itself is scalable. Surely the blueprints for building a very short person are not so different from the blueprints for building a very tall person. Our current understanding is that signals from growing body parts signal to each other to accomplish this task. The same signals build a short or tall body, but a tall body might undergo more cell division or longer periods of growth than a short body.

Classical developmental biology relies on mutations (gene based) and teratogenic (environment based) anomalies to dissect processes like this. Not only can we compare "normal" anomalies like heights that fall two standard deviations from the average, but we can also look at more rare anomalies like conjoined twin tadpoles or a cyclopic (one eyed) mouse. Both of these anomalies have the bonus of being able to be created in the lab. In fact, we can create them using either genetics, or environmental insult (a teratogen).

In a very real way, the fields of Development and Evolution cannot be truly separated. When we study Developmental Biology we are mostly looking at a fine-tuned mechanical and genetic process that has been selected on for eons. Not only can evolution select on the final product - a working, fertile adult - but it also can act at each developmental stage. It is easy to see how evolution acts through natural selection on adults, but how can it act on development itself? Consider the useful but pesky fruit fly, Drosophila melanogaster. Unlike you and me, who have support from our society (family, friends, institutions), Drosophila are r-selected. They survive by mating frequently and producing massive amounts of offspring that they leave behind on rotting fruit. Selection on adult Drosophila includes things such as ability to fly, to find food, find mates, and evade fly swatters. But further types of selection affect embryonic Drosophila. Since the ability to mate quickly and produce many offspring is such a strong selective pressure on this species, embryos have evolved rapid development in response. In fact, Drosophila undergo such unusual developmental patterning in order to accomplish this incredibly fast development (about 24 hours to hatch into a larva), that we can use them as a model to see how evolution can speed up normal developmental processes. Surprisingly, to me at least, speeding up development doesn't just mean that everything moves along more quickly. Instead, Drosophila and its relatives undergo a unique type of embryonic development called "long germ-band" development. Instead of developing by slowly elongating and adding new differentiated tissue to the posterior end of the body, as many animals do, long germ-band insects develop all at once - rapidly subdividing an undifferentiated field of cells into the many parts of the larval body.

This example is a classic illustration of evolution acting on developmental processes. There are many other ways evolution acts on development, these are often related to the physical constraints experienced by a growing embryo. On the flip side, we can also think of evolution itself as being constrained by development. Although much of natural selection acts on adults, that adult body must be formed by developmental processes inherited from ancestors and influenced by the environment. This is a limit on the types of bodies that can be produced, even if selective pressures are strong. However, the average member of a species does not show us the extremes of what morphologies are possible given evolutionary and physical constraints. This is where it becomes important to look at anomalies and other variation. When we see that height is scalable, we can look at the evolution of height in the past (what pressures drove the Homo genus to become tall with Homo erectus and its descendants), pressures on height in the present (locomoter issues with very short or very tall heights), as well as the development of height (length of puberty, environmental factors such as food and toxins). By examining our very short and very tall people, we can see the outer limits of these evolutionary and developmental constraints. Likewise by looking at rare anomalies (for example people born without limbs) we can examine the limits of perturbing development and find out what is possible.

One great example of the interconnectedness of evolution and development is the problem of scaling in flies. Briefly, there are closely related fly genera that vary widely in size but have very similar proportions. An outstanding question in EvoDevo is: how do flies change their scale by tweaking or changing developmental processes?