Proteins and glycoproteins on cell surfaces play a major role in how cells interact with their surroundings and with other cells. Some of the proteins in the glycocalyx of adjacent cells interact to form cell-cell junctions, while others interact with extracellular proteins and carbohydrates to form the extracellular matrix (ECM). Still others are part of receptor systems that bind hormones and other signaling molecules at the cell surface, conveying information into the cell by signal transduction.

Cell junctions serve different functions in cells and tissues. Cell junctions in healthy cells serve to bind cells tightly, to give tissues structural integrity and to allow cells in contact with one another to pass chemical information directly between them. Electron micrographs and illustrations different cell junctions are shown on the next page. Many glycocalyx proteins that interact to form junctions between cells are glycoproteins. Generally, proteins that interact to bind cells together are called Intercellular Cell Adhesion Molecules (ICAMs). These include selectins. During blood clotting, selectins on one platelet recognize and bind specific receptors on other platelets, contributing to the clot. NCAMs are another kind of ICAM, ones with sugary immunoglobulin domains that interact specifically to enable neural connections. We’ve already seen the calcium-dependent cadherins involved in forming adherens junctions (desmosomes). These are essentially the ‘glue’ that binds cells together to form strong cohesive tissues and sheets of cells.

Some examples of membrane proteins that enable cell-cell recognition and adhesion are illustrated on the next page. B. Cancer and Cell Junctions

During embryogenesis, cells migrate from a point of origin by attaching to and moving along an extracellular matrix (ECM), which acts as a path to the cell’s final destination. This ECM (or basal lamina) is made up of secretions from other cells…, or from the migrating cells themselves! One major secretion is fibronectin. One of its functions is to bind to integral membrane proteins called integrins, attaching the cells to the ECM. During development, integrins respond to fibronectin by signaling cell and tissue differentiation, complete with the formation of appropriate cell junctions. An orderly sequence of gene expression and membrane protein syntheses enable developing cells to recognize each other as different or the same. The influences of cell surfaces on tissue differentiation are summarized below. 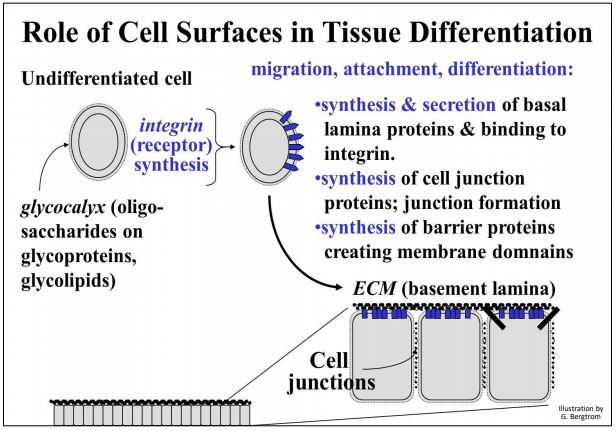 An early difference between eukaryotic normal and cancer cells is how they grow in culture. Normal cells settle to the bottom of a culture dish when placed in growth medium. Then they grow and divide, increasing in number until they reach confluence, when a single layer of cells completely covers the bottom of the dish. The cells in this monolayer seem to ‘know’ to stop dividing, as if they had completed formation of a tissue, e.g., a cell layer of epithelial cells. This phenomenon, originally called contact inhibition, implies that cells let each other know when they have finished forming a tissue and can stop cycling and dividing. In contrast, cancer cells do not stop dividing at confluence. Instead, they continue to grow and divide, piling up in multiple layers.

Among other deficiencies, cancer cells do not form gap junctions and typically have fewer cadherens and integrins in their membranes. Thus, cancer cells cannot inform each other of when they reach confluence. Neither can they form firm adherens junctions. In vivo, a paucity of integrins would inhibit cancer cells from binding and responding to fibronectin. Therefore they also have difficulty attaching firmly to an extracellular matrix, which may explain why many cancers metastasize, or spread from their original site of formation. These differences in growth in culture between normal and cancer cells are shown below. 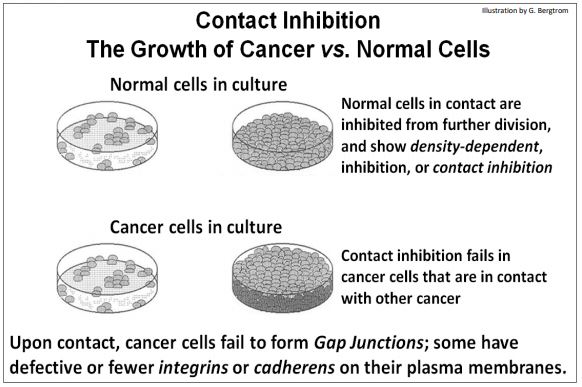 313 Formation of a Glycocalyx, Normal Development and Cancer

314 Role of the Extracellular Matrix in Cell Migration and Development