Like evolution, the origin of life involved some prebiotic ‘natural selection’ of chemicals in the environment. As with evolution, this chemical selection would favor expanding possibility and diversity. In simple terms, atoms that could interact with a maximal number of other atoms to form the largest number of stable molecules would have been most likely to accumulate in the environment. The tetravalent C atom met these criteria for chemical selection, proving perfect for building an organic chemistry set.

At the same time, water turned out to be the perfect place to launch prebiotic chemical selection experiments. Water persists as the life’s universal solvent, which by way, is why evidence of water in places beyond our earth gets us all excited!

A. Isomerism in Organic Molecules and the Diversity of Shape

Look at the examples of structural isomers and geometric isomers below. It is easy to see that the structural isomers of C4H10 (above left and right) have different shapes. You cannot convert one structural isomer to the other without breaking covalent bonds. In the geometric isomers of C4H8 in the lower panel, the H atoms on the double-bonded C atoms can be on the same (cis) or opposite (trans) side of the planar double bond. Geometric isomers too, cannot be interconverted without breaking chemical bonds. Optical isomers are yet a third kind of isomer. They exist around optically active (asymmetric, or chiral) carbons. A chiral C is one that is covalently linked to four different atoms and/or molecular groups. The principle of chirality is illustrated below. 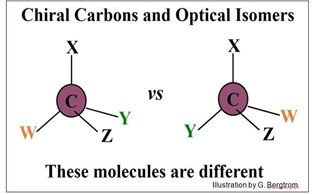 Optical isomers (also called enantiomers) also differ in shape, and just like structural and geometric isomers, they can’t be converted from one to the other without breaking and re-making covalent bonds. We say that optical isomers are optically active because they bend, or rotate light in opposite directions in a polarimeter. Light passing through a solution of one optical isomer is rotated in one direction while light passing through the other isomer is rotated in the opposite direction. These directions are referred to as l, or levo (meaning left) and d or dextro (meaning right). If a molecule has more than one chiral C (glucose for example has four chiral carbons), its behavior in a polarimeter will be based on the sum of optical activities of all the chiral carbons. The common isomer of glucose in our diet is d-glucose. The d- and l- isomers of glucose are illustrated below (showing chiral carbons in red). Glucose enantiomers are also referred to as D and L respectively. This is a convention based on the configuration of the four different atoms or groups around the last optically active carbon in a molecule (5C in glucose). For glucose, d and l in fact correspond to D and L respectively. As we will see for some molecules, the upper case designation of a chiral molecule does not always indicate how it bends light in a polarimeter, while the lower case d and l always do!

Remember that the shape and chemical properties of any molecule dictates its function. Isomerism in organic (carbon-based) molecules increased the diversity of molecular shapes available for chemical selection. An early selection of isomers (and specific optical isomers in particular) during chemical evolution contributed greatly to chemical functions and reactions we recognize in cells… even before there was life on earth. That all life uses the same isomers of glucose in energy reactions and the same isomers of amino acids to build proteins confirms the prebiotic selection of those isomers!

B. Monomers to Polymers and Back: Dehydration Synthesis and Hydrolysis

Repeated condensation reactions such as the one between two amino acids shown below form the peptide linkages that build polypeptides during translation. Cells perform repeated condensation reactions to build other polymers, including polysaccharides and polynucleotides (the RNA and DNA nucleic acids). Consider the polymerization of glucose monomers into storage or structural polysaccharides for example. Cells use only (d)glucose is used by cells to make polysaccharides. Straight-chain (d)glucose with four chiral carbons becomes cyclic when dissolved in water, where the cyclic molecule acquires a fifth chiral carbon, shown below. The fifth pair of enantiomers in solution are called a and b, or more correctly, a(d)glucose and b(d)glucose. Having selected d-glucose for most cellular energy metabolism, life then exploited the additional chiral carbon in cyclic d-glucose to make the different polysaccharide polymers we now find in plants and animals. The -OH (hydroxyl) groups on the #1 C of a(d)glucose are below the glucose rings. The condensation reaction removes a water molecule, linking the sugars by an a1,4 glycoside linkage in the dimer, connecting them by their # 1 and # 4 carbons. Other linkages are possible; diverse a-glycoside linkages characterize branched storage polysaccharides like glycogen in animals and the starches in plants. When b(d)glucose enantiomers polymerize, they form rigid structural polysaccharides such as those of cellulose in plant cell walls. A modified b-glucose called N-acetyl glucosamine (not shown) polymerizes to form chitin, the principal component of fungal cell walls and of the tough exoskeleton of arthropods (insects, crustacea). In another chapter, we’ll revisit the linkage of amino acids the in the process of translation to build a polypeptide, using only L amino acids to make their proteins! We’ll also look at the details of replication and transcription that cells use to catalyze condensation reactions to synthesizing DNA and RNA from nucleotide monomers.

To conclude this chapter and to emphasize the significance of chirality to life, here is what can happen when the wrong isomer ends up in the wrong place at the wrong time…

Consider the story of Thalidomide, a tragic example of what happens if we are unaware of enantiomeric possibilities. Introduced in 1957, Thalidomide sold as an over-the-counter anti-nausea drug for cancer treatments and as a very effective morning sickness remedy for pregnant women. However, by the early 1960s, the birth of about 10,000 infants with severely deformed limbs was connected to the drug. The half of the infants affected that survived did so with other defects as well. Of course, the response was to pull Thalidomide off the market.

Thalidomide is a teratogen. Teratogens are substances or conditions (drugs, chemicals, radiation, illness during pregnancy, etc.) that cause deformities during embryogenesis and fetal development. The chemical basis of Thalidomide’s effects are based on its enantiomeric (chiral) structure in which an amine-containing ring can exist in front of, or behind the rest of the molecule.

The structure of Thalidomide is shown below. The two isomers are referred to as ‘S’ and ‘R’. Of these, the S isomer is the teratogen. While synthesis of pure R is possible, when used in treatment, R and S easily interconvert, creating a racemic mixture. In the mother, S is transferred to the embryo or fetus, with its terrible consequences. Remarkably, there were relatively few cases of Thalidomide-induced birth deformities in the United States because our FDA (Food and Drug Administration) had not yet approved the drug for clinical use. Of course, we already knew that cells synthesized polymers from specific optical isomers of their precursor monomers. So the sad Thalidomide story resulted from the untested effects of an unexpected optical isomer. Many countries quickly tightened their pre-approval drug testing regulations because of this tragedy.

In a more hopeful twist of the tale, Thalidomide has turned out to be effective in treating cancer, leprosy, rheumatoid arthritis and other autoimmune diseases. Such therapeutic benefits may be due to its anti-inflammatory effects. Its effects on tumor growth seems to be due to its inhibition of angiogenesis (development of blood vessels) in the tumors. Ironically, blockade of angiogenesis might also have contributed to the failure of proper limb growth during pregnancy.

To conclude, when all is normal, the shapes of molecules, particularly macromolecules, are essential for the specificity of reactions essential to life.

131 Shape & the Specificity of Molecular Interactions