Flowering plants (angiosperms, Angiospermae) are sometimes referred to as “Spermatophyta 2.0.”, or “upgraded gymnosperms”. In fact, there is no single character which unequivocally differs flowering plants from other seed plants. Only several characteristics combined together will distinguish angiosperms. Flowering plants have their ovules inside an additional cover: pistil which corresponds with megasporophyll (sporangium-bearing leaf); later, the pistil develops into the fruit. These plants have an almost complete reduction of gametophytes: three or even two cell of the pollen (male gametophyte) and seven (sometimes even four) cells in embryo sac (female gametophyte), there are no archegonia or antheridia. Like gnetophytes, they have double fertilization. The sperms (spermatia) come through the pollen tube (like in conifers and gnetophytes). One sperm fertilizes the egg cell, and the other sperm fertilizes the biggest cell of embryo sac (Figure \(\PageIndex{1}\)).

While the first fertilization results in a “normal” diploid zygote which grows into embryo, the second fertilization ignites the process of feeding tissue development. This feeding tissue is endosperm\(_2\), frequently triploid (\(3n\)) since it originates from the sperm and cell with two nuclei and sperm, or diploid (\(2n\)), if the biggest cell of embryo sac (central cell) had one nucleus only.

Double fertilization may be explained in several ways:

1. the second fertilization results in second, “altruistic” embryo which sacrifices itself to feed the sibling;

2. second fertilization is only a signal which initiates the development of endosperm and it does not really matter which genotype it has; 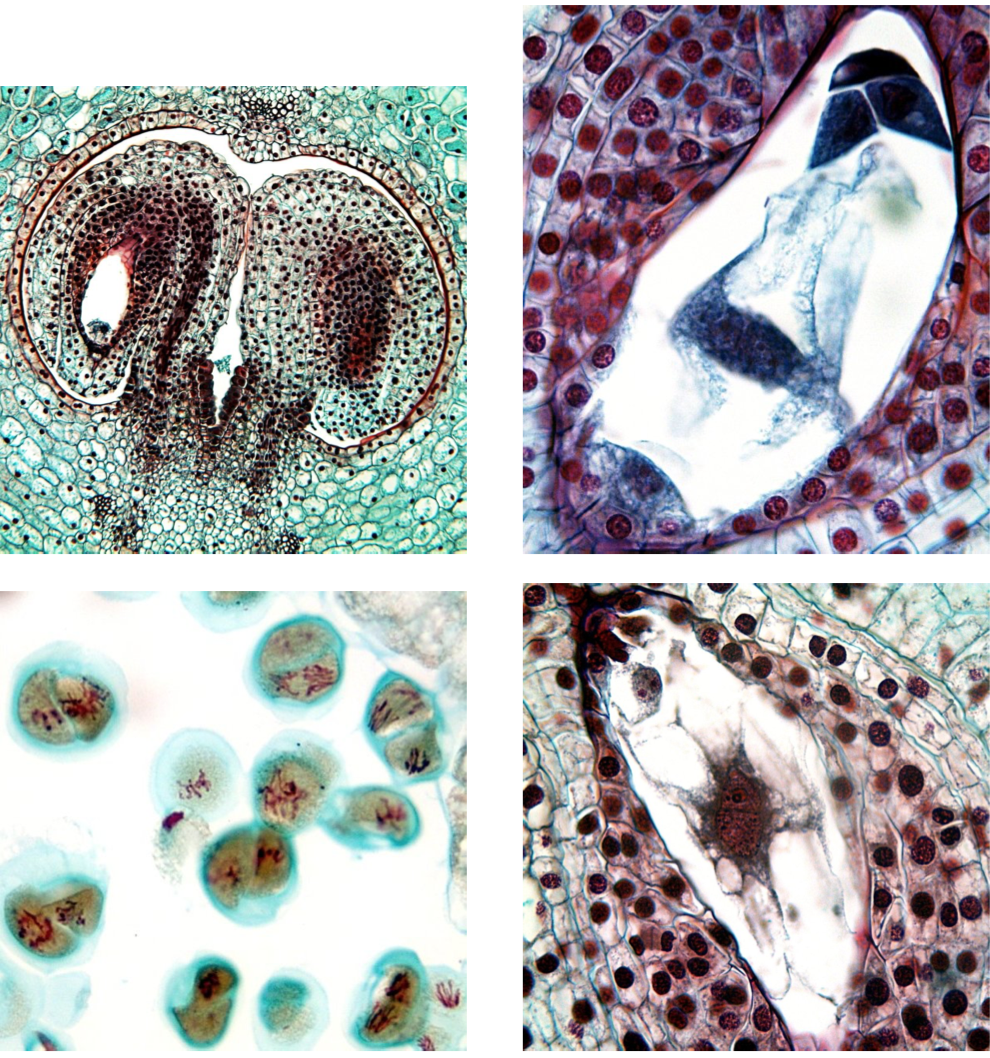 Figure \(\PageIndex{1}\) Left to right, top to bottom: Lilium (Liliidae) ovules, female gametophyte (em- bryo sac), meiosis II in pollen sacs and double fertilization (egg cell on top is fusing with first sperm, second sperm nucleus in the center is fusing with the nucleus of the central cell). Magnifications ×100 (first) and ×400 (others). 3. to make a functional nutrition tissue, angiosperms need a polyploid genome whereas its origin is not so important.

Second hypothesis explains well how angiosperms saved time and resources. Third hypothesis is indirectly supported by the fact that in animals, namely two families of scale insects, there is a similar process (zygote descendant joins sister cell of the egg) which resulted in special polyploid bacteriome, tissue rich of symbiotic bacteria.

One way or another, flowering plants abandoned pre-fertilization development of the nutrition tissue, and changed endosperm\(_1\) to endosperm\(_2\) (Figure \(\PageIndex{2}\)).

In the Mesozoic era, gymnosperms were the dominating plants of the tree story. However, in the uderstorey, herbaceous spore plants did not surrender to seed plants and were still dominating. Amazingly, there were almost no herbaceous gymnosperms! The explanation is that gymnosperms, being quite advanced in general, had a slow and ineffective life cycle.

While ferns and mosses have one “gunshot” in their life cycles (this is fertilization, because dissemination of spores is mainly random), seed plants have two: first, they want to pollinate the target plant, and second, they still need to fertilize egg cell. Naturally, keeping these two Figure \(\PageIndex{1}\) Life cycle of angiosperms. Innovations (comparing with the the ancestral seed plant life cycle) are in red.

“gunshots” is more complicated then keeping one.

Second shot ancestrally uses water, but higher seed plants managed to get rid of it with pollen tube. First shot used wind which is a natural pollination agent. However, more sophisticated pollination (like insect pollination) was hard to achieve, partly because it requires edible parts like nectar or excess pollen.

If gymnosperms were to increase the speed of life cycle, make more sexual structures, grow rapidly, improve vegetative reproduction, make better pollination and seed dispersal, they could win the competition with ferns in the understory. This is exactly what happened with flowering plant ancestors. Flowering plants grow fast and restore missing (eaten) parts with high speed, they parcellate (clone from body parts) easily, they have small and numerous floral units (flowers) which are frequently bisexual but protected from self-pollination and adapted to insect pollination, they guard ovules with pistil wall, their pollen tube grows in hours (not days and weeks), they use fruits to distribute seeds.

There is a growing evidence that these ancestors were paleoherbs, herbaceous plants (and maybe, even water plants like one of the most primitive angiosperms, fossil Archaefructus, or basal extant Ceratophyllum). Right after they won a competition with herbaceous spore plants, they started to conquer the tree storey again, and now, angiosperms dominate the Earth. There are more than 250,000 species of them which is more than any other group of living beings except insects. There are about 300 families and around 40 different orders. The only places that angiosperms do not grow are the open ocean and the central Antarctic.

The life cycle of angiosperm (Figure \(\PageIndex{3}\)) begins much like that of other seed plants; however, when it reaches the point of fertilization, it changes. The male gametophytes, pollen grains, produce pollen tubes which rapidly grow to the ovule and deeper, to the embryo sac. The embryo sac typically has seven cells and eight nuclei (two nuclei in the central cell). The first sperm fertilizes the egg and produces the zygote whereas the second sperm fertilizes the central cell and produces the mother cell of the endosperm\(_2\):

(At the time of fertilization, central cell could be haploid, with one nucleus, or diploid, with two nuclei; this is because it runs mitosis without cytokinesis at the end. Consequently, nucleus of the second sperm fuses with either one or two nuclei and endosperm\(_2\) is either diploid or (more often) haploid.)

At the end of life cycle, the flowering plant develops the fruit (Figure 8.2.1). Each part of the fruit is of different origin: fruit skin and wall are from mother plant pistil, seed coat is from mother plan ovule, endosperm\(_2\) is a result of second fertilization, and embryo is a daughter plant resulting from the first fertilization.

What is interesting, the embryo of angiosperms is still parasitic: it lives on endosperm which originates from (fertilized, ignited) cell of female gametophyte—in essence, still similar to mosses.