Seed plants consist of approximately 1,000 species of non-angiosperms (gymnosperms) and about 250,000 species of angiosperms. They have a sporic life-cycle with sporophyte predominance, and seeds. The gametophyte is reduced to cells inside the ovule or pollen grain. Males have a minimum number of cells being three and females being four. The antheridia are absent and in flowering plants (Angiospermae) and Gnetopsida the archegonia are also reduced. The sporophyte will always start as an embryo located inside the nutrition tissue, endosperm\(_1\) which is the female gametophyte or in endosperm\(_2\) (see the next chapter). Spermatophyta have axillary buds (buds in leaf axils). Like ferns, they are megaphyllous and homoiohydric, and have a secondary thickening. Higher groups of seed plants lost flagellate spermatozoa and developed pollen tubes. The classes of Spermatophyta are Ginkgoopsida, Cycadopsida, Pinopsida, Gnetopsida, and Angiospermae.

Ginkgoopsida is just one species; ginkgo or maidenhair tree (Ginkgo biloba). This plant is long extinct in the wild but is grown on Chinese temple grounds as a decorative tree. Ginkgo is a large tree bearing distinctive triangle-shaped leaf with dichotomous venation. This plant is also dioecious (as an exception among plants, Ginkgo has sexual chromosomes like birds and mammals) and the pollen is transported by wind to female (ovulate) trees. The pollen grains of the ginkgo plants produce two multi-flagellate spermatozoa; the edible seed is fruit-like and becomes ripe after lying on the ground for a long time. Maidenhair tree has symbiotic cyanobacteria in cells. As ginkgo probably went through the population bottleneck, there are very few, almost no, phytophagous insects that can damage ginkgo leaves. The only fungus which is capable to eat them, Bartheletia, is also a living fossil.

Cycadopsida—cycads is a class with few genera and about 300 species that grow mostly in tropics. Only one species grows naturally in the United States, Zamia pumila, and can be found in Florida and Georgia. Cycads are palm-like plants with large, pinnate leaves. Their wood is rich of parenchyma since stem has anomalous secondary thickening. They are all dioecious and its cone is large and protected by prickles and woody plates. The ovules of these plants are attached to modified leaves (megasporophylls) that are gathered in upright cones. Like ginkgo, they have multi-flagellate spermatozoa, archegonia and large oocyte. Cycad seeds are distributed by animals. Life cycle is extremely slow.

Pinopsida—conifers are the most widely known and economically important among gymnosperms. Conifers consist of approximately 630 species. Most of them are temperate evergreen trees, but some are deciduous, such as larch (Larix). The stem has a large amount of xylem, a small cork, and minute pith. The ovules are attached to specialized leaves, seed scales, and are compacted in cones with bract scales (Figure \(\PageIndex{1}\)). Some conifers, like junipers (Juniperus) and yews (Taxus), lack woody cones; these plants have fleshy scales. Seeds are distributed by wind and animals. 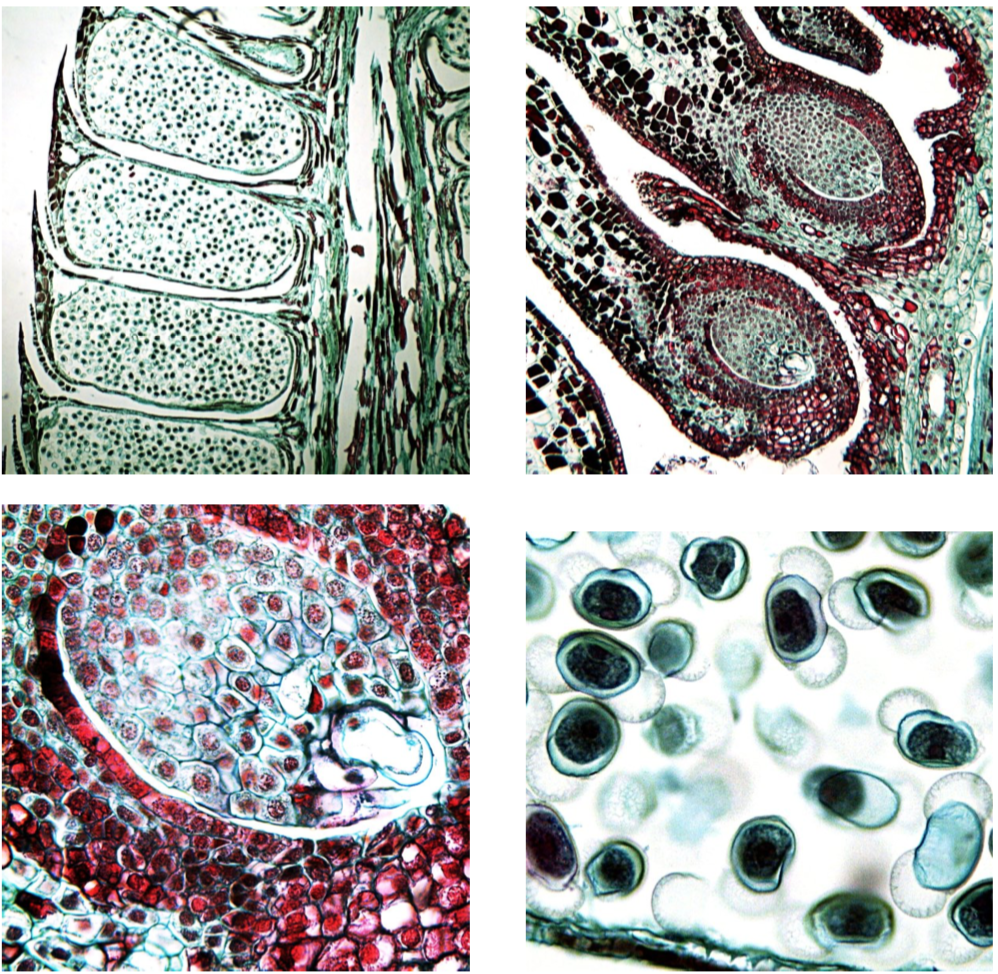 In all, conifer life cycle takes up to two years. Conifers do not have flagellate spermatozoa; their non-motile male gametes (spermatia) move inside long, fast-growing pollen tube. Among families of conifers, Pinaceae (pine family) have resin and needle-like leaves; Pinus have them in shortened shoots, brachyblasts, and their large cones have woody scales. Cupressaceae (cypress family) do not have resin, produce small cones that have a fused bract and seed scales, have dimorphic leaves, and some of their genera (like “living fossil” Metasequoia from China) are deciduous in an unusual way: they drop whole branches, not individual leaves.

Gnetopsida—gnetophytes are sometimes called chlamydosperms. They are a small class with only three genera that are not at all similar: Ephedra, Welwitschia, and Gnetum. While these plants morphologically remind of angiosperms, they are molecularly related more to other gymnosperms. Ephedra are horsetail-like desert leafless shrubs, Gnetum are tropical trees, and Welwitschia are plants which have a life form that is really hard to tell (Figure \(\PageIndex{2}\)). Figure \(\PageIndex{2}\) Gnetopsida “even man out” game: Gnetum, Welwitschia, Ephedra, and ... Coffee. Which is where?

Ephedra has archegonia, but in Gnetum and Welwitschia they are reduced. On the other hand, Ephedra and Gnetum have double fertilizationthe process when two brother male gametes fertilize two sister female cells: both male nuclei fuse with cells of the one female gametophyte (endosperm\(_1\)): with egg cell and another haploid cell, sister to the egg. Double fertilization in gnetophytes results in two competing embryos, and only one of them will survive in future seed.

Both Gnetum and Welwitschia have vessels (like angiosperms). Gnetum also has angiosperm-like opposite leaves with pterodromous venation, like, for example, coffee tree (however, this probably is a result of modification of dichotomous venation). Ovules of chlamydosperms are solitary and covered with an additional outer integument; the male gametes are spermatia moving inside pollen tube.

Welwitschia is probably most outstanding among gnetophytes. There is only one species that occurs in the Namibian desert. The best way to describe this plant is an “overgrown seedling.” It has a small trunk with two wide leaves that have parallelodromous venation. The secondary thickening is anomalous, wood has vessels. Plant is insect-pollinated, and its winged seeds are dispersed by the wind. Fertilization is not double, but, along with pollen tubes, involves the most crazy structures: prothallial tubes which grow from female gametophyte and meet with pollen tubes to make zygote.

Life cycles determine the basic diversity of plants, they designate plant phyla. Let us compare three types of life cycles again (Figure \(\PageIndex{3}\)) and again (Figure \(\PageIndex{4}\)). What is visible on all these schemes, as well as on all similar schemes from above, is growing complexity of cycle, growing reduction of haploid stage, and growing self-similarity within the cycle.