Thickening and branching change the appearance of plant. The most ancient classification employ both branching and thickening and divide plants into trees, shrubs and herbs. This approach was the first classification of life forms. Life forms tell not about evolution, but about how plant lives. We still use this classification. With some modifications, it plays a significant role in gardening:

This classification system has many downfalls. What is, for example, the raspberry? It has woody stems but each of them lives only two years, similar to biennial herbs. Or what is duckweed? These small, water-floating plants with ovate non-differentiated bodies are hard to call “herbs”. 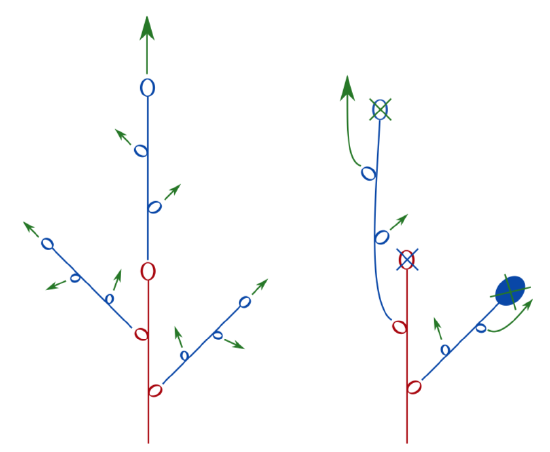 As one can see, the actual diversity of plant lifestyles is much wider than the classification above.

During the winter, it is easy to see that some tree crowns have similar principles of organization. In the winter-less climates, the diversity of these structures is even higher. On the base of branching (monopodial or sympodial), location of FU, and direction of growth (plagiotropic, horizontal or orthotropic, vertical), multiple architectural models were described for trees. Each model was named after a famous botanist such as Thomlinson, Corner, Attims, and others. In temperate regions, one of the most widespread models is Attims (irregular sympodial growth): birches (Betula) and alders (Alnus) grow in accordance with that model (Figure \(\PageIndex{2}\)). In tropical regions, many plants (like palms and cycads) have single thick trunks crowned with large leaves, this is Corner model (Figure 7.4.1).