Organic chemistry is usually described as the chemistry of carbon containing molecules. But isn't that definition a bit carboncentric, especially since the prevalence of oxygen-containing molecules is staggering? What about nitrogen? We live in a dinitrogen rich atmosphere (80%), and all classes of biomolecules (lipids, carbohydrates, nucleic acids and proteins) contain nitrogen. Dinitrogen is very stable, given its triple bond and nonpolarity. We rely on a few organisms to fix N2 from the atmosphere to form ammonium (NH4+), which through nitrification and denitrification can form nitrite (NO2-), nitrate (NO2-), nitric oxide (NO) and nitrous oxide (N2O),the latter being a potent greenhouse gas. We'll concentrate on the metabolic fate of amino groups in amino acids and proteins in the next section. Before exploring their fates, look at the figure below which shows an overall view of the biological nitrogen cycle. The study of biochemistry should encompass more than homo sapiens and expand to the ecosystem in which we are such a small but damaging part.

Let's break down the diagram from a biochemical perspective. There are aerobic and anaerobic processes (conducted by bacteria). Nitrogen-containing substances include both inorganic (ammonium, nitrate, nitrite) and organic (amino acids, nucleotides, etc) molecules. The reactions shown are oxidative and reductive (note: the oxidation number of the nitrogen atoms in the molecules are shown in red). Most of the reactions are carried out underground by bacterial and archaeal microorganisms. Here are some of the major reactions:

These added ions exceed soil capacity and end up runoff water, polluting our rivers and lakes.

These reactions are shown in the abbreviated Nitrogen Cycle below. 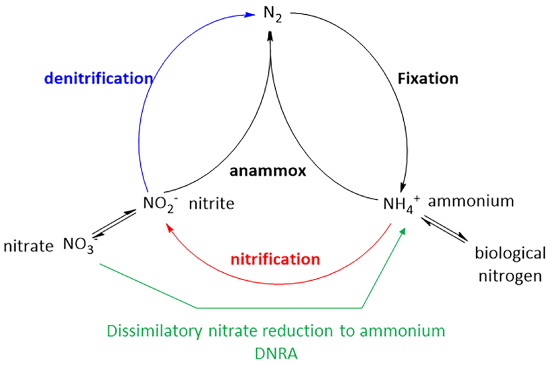 Nitrogen metabolites are nutrients for plants and perhaps the most import nutrients in the regulation of plant growth (primary productivity) and in regulating life diversity in the biosphere. All living organisms require feedstocks to produce energy and as substrates for biosynthetic reactions. Which are used depend on the organism. Plants are primary producers so they use their own synthesized carbohydrates for both energy production and for biosynthesis. For carnivores, proteins and their derived amino acids are the source of energy (through oxidation) and serve as biosynthetic precursors. For organisms that are omnivorous, the source of energy depends on the "fed" state. With abundant food resources, carbohydrates and lipids are the source of energy. Unlike carbohydrates and lipids, which can be stored as glycogen and triacylglycerides for future use, excess protein and their associated amino acids can not be stored, so amino acid can be eliminated or used for oxidative energy.

In the fed state, carbohydrates are the main source, while in the unfed state, lipids take a predominant role. Under starving conditions, the organisms own proteins are broken down and used for oxidative energy production and for any biosynthesis that remains. In diseased states like diabetes, which can be likened to a starving state in the presence of abundant carbohydrates, both lipids and amino acids become the sources of energy.

How are amino acids in animals oxidatively metabolized? Many pathways could be used to do so but it would seem logical that NH4+ would be removed and the carbons in the remaining molecule would eventually enter glycolysis or the TCA cycle in the form of ketoacids. NH4+ is toxic in high concentration. Ammonium is not oxidized to nitrite or nitrates in humans as occurs in the soil by microorganisms. It can be recycled back into nucleotides or amino acids, and excess amounts are eliminated from the organism. Both processes must be highly controlled. We will turn out attention to the oxidation of amino acids in the next section.