The enzyme γ-glutamyl transpeptidase (GGT), which is localized to the cell surface, cleaves the γ-glutamyl amide bond of extracellular glutathione (right), and transfers the γ-glutamyl group to an acceptor substrate.

a. A compound, OU749 was discovered that inhibited the enzyme. Shown are the structure of OU749 (left) and substrate velocity curves (right) for the inhibition of human kidney GGT by 0 μm (▪), and various concentration of OU749 (15.2 μm (next curve down), then 31.3 μm, 62.5 μm, and 125 μm) in the presence of 40 mm glygly. From inspection of the graph, do you think the inhibition is competitive? Explain? 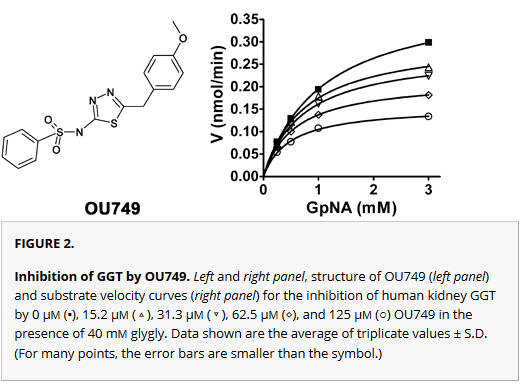 It can't be competitive since the apparent Vm clearly decreases with increasing inhibitor. By inspection it appears that the Km might also be decreasing as well, so it could be uncompetitive. Double-reciprocal plots would make it easier to see. However, for a definitive answer, the data should be subjected to a nonlinear fit to the mathematical equations for COMP, UNCOMP, and MIXED inhibition.

b. For the reaction of L-glutamic acid γ-4-nitroanilide HCl (GpNA) and 40 mm glycyl-glycine (glygly) (acceptor), draw the products of the reaction.

c. What wavelength would you choose to monitor the course of the reaction? ___405 nm____ nm

This is the optimal wavelength for absorbance of p-nitroanilide which produces a yellow color in solution.

d. The mechanism seems to involve a covalent intermediate of the substrate with the enzyme through an N terminal Thr. This threonine is conserved in human, rat, mouse, and pig. Draw a mechanism showing the initial reaction of glutathione (abbreviated structure shown below) with the N terminal Thr and then in the subsequent reaction with the acceptor Gly-Gly (represented in your diagram as R’NH2)

e. Site-directed mutagenesis of human GGT has identified four additional amino acids that are essential to GGT activity Arg 107, Asp-423, Ser-451, and Ser-452 . All four of these amino acids are identical in human, rat, mouse, and pig.

h. In multi--substrate reaction, the following effects of dead-end inhibitors (I) are observed

j. The plain old amino acid serine was added to the enzyme. What type of inhibitor might it be? _competitive_______ Show this by positioning Ser into the active site cartoon cartoon diagram below.

k. A Ser-borate complex (right) is a much more effective inhibitor. From your knowledge of how enzymes catalyze chemical reactions, explain why in a single phrase.

k. Site specific mutagenesis was performed to see how changing specific serines (S) would affect activity. (WT = wild-type, unmutated control). The following mutants, denoted as S###X where X is the new amino acid (blacked out in the table below) were made. Which amino acid would the investigators choose to replace Ser in the mutants? __Ala_to maintain side chain size_____

m. Only one kinetic parameter is significantly changed (think of the % changes on the parameters). What step in catalysis is affected in the mutants?

Vm which dramatically decreases suggesting that kcat, the rate at which bound substrate is converted to product, is affected.