Double-standed DNA is a polyanion as every phosphate in the backbone is negatively charged. To pack it into chromosome in the nucleus, DNA is complexed to a variety of proteins. In the first stage of packing, DNA is wound around a core of positively charged histones protein, forming a nucleosome. The size of the nucleosome is about the size of RNA polymerase.

A. For RNA polymerase to transcribe DNA that is packed in a nucleosome, what must likely happen to the nucleosome complex?

The DNA must unwind from the histone core of then nucleosome to allow binding of transcription factors and ultimately RNA polymerase to the regulatory regions of the DNA (promoter, etc). Otherwise DNA-dependent RNA polymerization will not occur.

B. The phenotype of a cell depends on the DNA sequence of the cell and the subset of genes that are expressed by that cell. The emerging field of epigenetics describes how factors other than the DNA sequence control cell phenotype and heritability of traits. Key features in epigenetic regulation of gene transcription are chromatin remodeling, packing and covalent modification of DNA. Chromatin packing at the level of DNA:histone interactions are critical. Key to these interactions are the state of covalent modification of lysine (K) side chains in protein by histone acetylases (HATs) which are also called lysine acetylases (KATs) and histone deacetylases (HDACs). Two chemical modifications of lysine side chains in histones are shown below.

a. Offer a chemical explanation of why structure b will not be acetylated by KAT.

b. What affect might KAT modification of histone lysine side chains have on transcriptional competency of DNA in nucleosomes?

1,4-Naphthoquinone derivatives are naturally occurring compounds that are present in the Plumbago and Diospyros plant genera and have a variety of biological activities. One such derivative, plumbagin, is a potent inhibitor of a particular lysine acetyltransferase, KAT p300 lysine acetyltransferases 3B/3A (p300/CBP). Some of the inhibitors are toxic to cells as they react with free RSH groups in cells and generate reactive oxygen species (ROS). An ideal drug would be nontoxic and an effective inhibitor/activator of a specific enzyme. Investigators synthesized a derivative (PTK1) of plumbagin which inhibit p300 and with much lower toxicity that plumbagin. How does it work?

Fig 1A: To study the toxicity of plumbagin, investigators dissolved it in the solvent DMSO + N-acetylcysteine (NAC) which scavenges ROS. They added these reagents to three different human cells lines, SHSY-5Y, HEK293, and HeLa S3 as shown below. a. What effect did plumbagin have on cell toxicity?

b. What effect did NAC have plumbagin cell effects?

c. What did the investigators conduct an experiment just DMSO alone?

Fig 1B. It has been shown that on DNA oxidative damage or breaks, one of the histones, H2AX is phosphorylated by a kinase, pI3K. Cells were treated as describe below (Plu = plumbagin_ and subjected to SDS-polyacrylamide gel electrophoresis. After the electrophoresis, a nitrocellluose membrane was placed on top and the proteins in the gel were electrophoresed into the membrane (a technique called Western blotting. Individual protein band were visualized by adding antibodies that recognized phosphorylated H2AXg, or histone H3 (without modification), followed by reagents that produce a dark band. Interpret the results. Why did the investigators do blots for unmodified H3? Fig 1C. What affect did plumbagin have on histone acetylation? Immuoblots were performed after plumbagin treatment in the presence or absence of NAC in the indicated cell lines as above using antibodies that recognized acetylated Lys 9 on H3 (H3K9), or histone H3 (without modfication). Does Plu inhibit H3K9 acetylation? How does NAC affect Plumbagin effect on acetylation? NAC seems to behave differently in the presence of two acetylation inhibitors. These results offer two possibilities for its effects. • ROS could lead to decrease acetylation of histones, and NAC, by decreasing ROS, restore acetylation. • Alternatively, plumbagin reacts with the RSH of NAC, which decreases it effect on KAT and restores acetylation.

Draw cartoon models that would reflect these two different scenarios using a line with an arrow to indicate activation or promotion of an activity, and a line with a blunt end to show inhibition. Also use and these symbols:

Investigators found no increase in ROS with purified KAT in a cell free in vitro produced no free radicals. Which of your models is more likely?

Fig 2AB. To simplify study of these effects, the investigators performed in vitro (cell free) assays in which no ROS (superoxide, hydrogen peroxide) would be produced. They studied two different KATs, p300 (A) and CBP (B) using HeLa cell core histones, with 100 μm plumbagin (lanes 5–7 in A and B) either in the presence or absence of NAC, DTT, and another reducing agent Trolox (lane 8). Interpret the results. What part of NAC and DTT appear important in their effects on plumbagin inhibition. Fig 3A: These data suggest a chemical reaction of NAC and DTT with plumgartin. The generic structure of 1,4-Naphthoquinone derivatives, including plumgartin, are shown below, along with NAC and DTT.

Fig 3B; The thiol group on NAC is likely to react with a sp2 C, ultimately leading to a product which retains conjugation if possible. Draw a mechanism showing how NAC might react with the structure below, and show the final products.

Fig 4 A: A variety of 1,4-Naphthoquinone derivatives were tested to see their effect on p300 activity in the presence and absence of NAC. One, lawsone, whose structure is given below, showed no inhibitory effects, as shown below. Give a likely chemical explanation for this observation.

Fig 4C. If they reacted with free thiols, then the naphthoquinone derivatives should have an effect on the concentration of free thiols in an in vitro assays. Results of one such assay are shown below. Compare this graph with the proceeding one. What conclusion can you draw?

Fig 5 (not shown): The authors used UV-Vis and fluorescence spectroscopy to study the effect of NAC on the spectra of 1,4-naphthoquinone analogs. What likely effects would you expect to observe on the spectrum of lawsone?

Fig 6A: The ultimate goal of the investigators was to make a 1,4-naphthoquinone derivative that was not cytotoxic which presumably results from its interactions with free thiols. They synthesized PTK1 as shown below. Why would this reaction produce a potential inhibitor that did not react with free thols in cells?

FIGURE 6B. Investigators studied the effects of PTK1 on P300 acetylation of HeLa core histones with different concentrations of PTK1 in the absence and presence of NAC (Figure B) as well the presence of free thiol in the presence or absence of PTK1 (Figure C).

What can you conclude from these graphs?

Figure 6D: The figure below shows the UV-visible absorption spectrum of PTK1 in the in presence or absence of NAC?

What conclusions can you draw?

Fig 6E: The figure below shows immunoblotting analysis (IB) of cell lysates upon 24 h of treatment by PTK1 using H3K9 acetylation antibodies. The concentrations of PTK1 used are indicated in the figure E. Error bars, S.D. What conclusions can you draw from the blots?

7. How might PTK1 inhibit p300 KAT activity. Enzyme kinetic analyses would be useful. The enzyme has two substates, acetyl CoA and histones. Previous studies have shown that substrates bind to p300 , in an ordered mechanism. The non-competitive inhibitor PTK1 could bind to the free enzyme as well as to the substrate-bound form, resulting in an abortive ternary complex. T 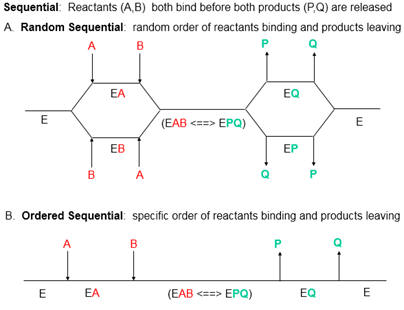 Presume that added reversible inhibitors behavior in a similar fashion with single and multi-substrate reactions. Here are some simple rules that apply to double reciprocal plots (1/v vs 1/[S} when 1 substrate is kept constant:

The slope changes when:

The Y intercept changes when:

Figure 7 AB: Figure 7 A and B below show double reciprocal or Lineweaver-Burk plots (1/v vs 1/[S]) of p300 KAT with one substrate fixed and the other varying at different fixed concentrations of inhibitor PTK1. By analogy with single substrate reactions shown below in the linked chemical equations, which type of inhibition is displayed by PTK1?