Fractionation of samples, as the name suggests, is a process of separating out the components or fractions of the lysate. Fractionation typically begins with centrifugation of the lysate. Using low-speed centrifugation, one can remove cell debris, leaving a supernatant containing the contents of the cell. By using successively higher centrifugation speeds (and resulting g forces) it is possible to separate out different cellular components, like nuclei, mitochondria, etc., from the cytoplasm. These may then be separately lysed to release molecules that are specific to the particular cellular compartment. The soluble fraction of any lysate can, then, be further separated into its constituents using various methods.

Supports are composed of tiny beads suspended in buffer (Figure \(\PageIndex{3}\)) and are designed to exploit the chemistry or size differences of the components of the samples and thus provide a means of separation. Columns are “packed” or filled with the support, and a buffer or solvent carries the mixture of compounds to be separated through the support. Molecules in the sample interact differentially with the support and, consequently, travel through it at different speeds, thus enabling separation.

In ion exchange chromatography, the support consists of tiny beads to which are attached chemicals possessing a charge. Before use, the beads are equilibrated in a solution containing an appropriate counter-ion to the charged molecule on the bead. Figure \(\PageIndex{5}\) shows the repeating unit of polystyrolsulfonate, a compound used as a cation exchange resin. As you can see, this molecule is negatively charged, and thus the beads would be equilibrated in a buffer containing a positively charged ion, say sodium. In the suspension, the negatively charged polystyrolsulfonate is unable to leave the beads, due to its covalent attachment, but the counter-ions (sodium) can be “exchanged” for molecules of the same charge.

On the other hand, in anion exchange chromatography, the chemicals attached to the beads are positively charged and the counterions are negatively charged (chloride, for example). Negatively charged molecules in the cell lysate will “stick” and other molecules will pass through quickly. To remove the molecules “stuck” to a column, one simply needs to add a high concentration of counter-ions to release them.

Ion exchange resins are useful for separating charged from uncharged, or oppositely charged, biomolecules in solution. The resins have a variety of other applications, including water purification and softening. Figure \(\PageIndex{5}\) shows use of a polystyrolsulfonate polymer in removing calcium for water softening. Figure \(\PageIndex{7}\) shows a profile of a group of proteins separated by size exclusion chromatography using beads with an exclusion limit of about 30,000 Daltons. Proteins 30,000 in molecular weight or larger elute in the void volume (left) while smaller proteins elute later (middle and right).

For example, if one wanted to separate all of the proteins in a cell lysate that bind to ATP from proteins that do not bind ATP, one could use a column that has ATP attached to the support beads and pass the sample through the column. All proteins that bind ATP will “stick” to the column, whereas those that do not bind ATP will pass quickly through it. The bound proteins may then be released from the column by adding a solution of ATP that will displace the bound proteins by competing, for the proteins, with the ATP attached to the column matrix. 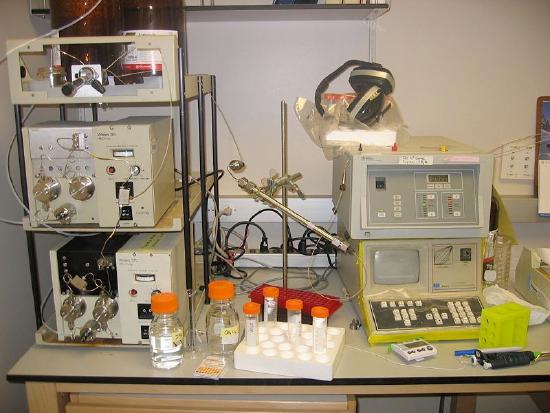 Figure \(\PageIndex{9}\): HPLC: Pumps on left/Column in center/Detector on the right. Wikipedia