A printable version of this section is here: BiochemFFA_4_3.pdf. The entire textbook is available for free from the authors at http://biochem.science.oregonstate.edu/content/biochemistry-free-and-easy

The magic of enzymes, as noted, is in their ability to create electronic environments conducive to initiation of a reaction. There are more mechanisms of reaction than we could ever hope to cover in a book like this, and comprehensive discussion of these is not our aim. Instead, we will cite some examples and go into detail on one of them - the mechanism of action of serine proteases.

We will begin with mechanism of action of one enzyme - chymotrypsin. Found in our digestive system, chymotrypsin’s catalytic activity is cleaving peptide bonds in proteins and it uses the side chain of a serine in its mechanism of catalysis. Many other protein-cutting enzymes employ a very similar mechanism and they are known collectively as serine proteases (Figure 4.52).

These enzymes are found in prokaryotic and eukaryotic cells and all use a common set of three amino acids in the active site called a catalytic triad (Figure 4.53). It consists of aspartic acid, histidine, and serine. The serine is activated in the reaction mechanism to form a nucleophile in these enzymes and gives the class their name. With the exception of the recognition that occurs at the substrate binding site, the mechanism shown here for chymotrypsin would be applicable to any of the serine proteases.

As a protease, chymotrypsin acts fairly specifically, cutting not all peptide bonds, but only those that are adjacent to relatively non-polar amino acids in the protein. One of the amino acids it cuts adjacent to is phenylalanine. The enzyme’s action occurs in two phases – a fast phase that occurs first and a slower phase that follows. The enzyme has a substrate binding site that includes a region of the enzyme known as the S1 pocket. Let us step through the mechanism by which chymotrypsin cuts adjacent to phenylalanine. The slight changes in shape involve changes in the positioning of three amino acids (aspartic acid, histidine, and serine) in the active site known as the catalytic triad. The shift of the negatively charged aspartic acid towards the electron rich histidine ring favors the abstraction of a proton by the histidine from the hydroxyl group on the side chain of serine, resulting in production of a very reactive alkoxide ion in the active site (Figure 4.55). 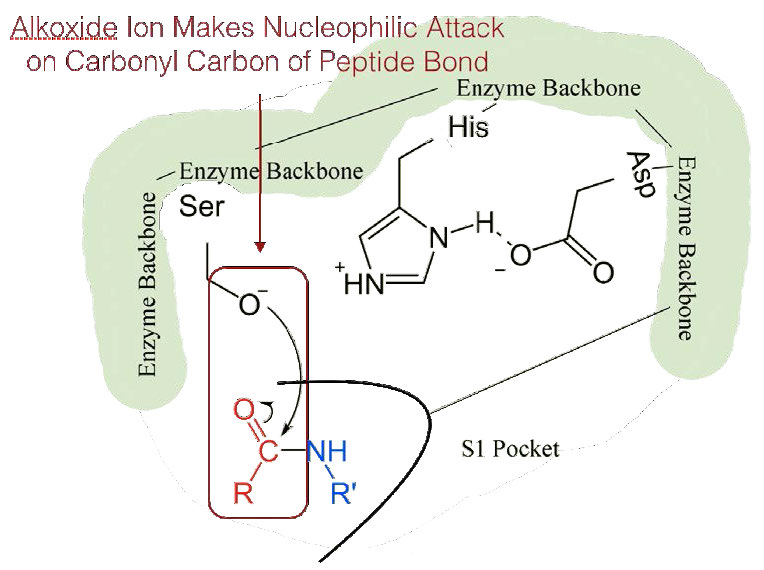 Since the active site at this point also contains the polypeptide chain positioned with the phenylalanine side chain embedded in the S1 pocket, the alkoxide ion performs a nucleophilic attack on the peptide bond on the carboxyl side of phenylalanine sitting in the S1 pocket (Figure 4.56). This reaction breaks the peptide bond (Figure 4.57) and causes two things to happen. First, one end of the original polypeptide is freed and exits the active site (Figure 4.58). The second is that the end containing the phenylalanine is covalently linked to the oxygen of the serine side chain. At this point we have completed the first (fast) phase of the catalysis. Figure 4.58 - 6. First peptide released. Other half bonded to serine.

The second phase of the catalysis by chymotrypsin is slower. It requires that the covalent bond between phenylalanine and serine’s oxygen be broken so the peptide can be released and the enzyme can return to its original state. The process starts with entry of water into the active site. Water is attacked in a fashion similar to that of the serine side chain in the first phase, creating a reactive hydroxyl group (Figure 4.59) that performs a nucleophilic attack on the phenylalanine-serine bond (Figure 4.60), releasing it and replacing the proton on serine. The second peptide is released in the process and the reaction is complete with the enzyme back in its original state (Figure 4.61). The list of serine proteases is quite long. They are grouped in two broad categories - 1) those that are chymotrypsin-like and 2) those that are subtilisin-like. Though subtilisin-type and chymotrypsin-like enzymes use the same mechanism of action, including the catalytic triad, the enzymes are otherwise not related to each other by sequence and appear to have evolved independently. They are, thus, an example of convergent evolution - a process where evolution of different forms converge on a structure to provide a common function.

The serine protease enzymes cut adjacent to specific amino acids and the specificity is determined by the size/shape/charge of amino acid side chain that fits into the enzyme’s S1 binding pocket (Figure 4.62). Examples of serine proteases include trypsin, chymotrypsin, elastase, subtilisin, signal peptidase I, and nucleoporin. Serine proteases participate in many physiological processes, including blood coagulation, digestion, reproduction, and the immune response.

The mechanism of action is very similar to that of serine proteases. Binding of proper substrate results in activation of the thiol (removal of the proton by the histidine group). The activated thiol acts as a nucleophile, attacking the peptide bond and causing it break. One peptide is released and the other peptide becomes covalently linked to the sulfur. Hydrolysis by water releases the second peptide and completes the cycle. Examples of cysteine proteases include papain, caspases, hedgehog protein, calpain, and cathepsin K. Figure 4.63 - Mechanism of action of proteases. In each case, a nucleophile is created - hydroxyl (aspartyl proteases), thiol (cysteine proteases), and hydroxyl (metalloproteases). Image by Aleia Kim

Caspases (Cysteine-ASPartic ProteASEs) are a family of cysteine proteases that play important roles in the body. At the cellular level they function in apoptosis and necrosis and in the body, they are involved in inflammation and the immune system. Maturation of lymphocytes is one such role. They are best known, however, for their role in apoptosis, which has given rise to descriptions of them as “executioner” proteins or “suicide proteases” that dismantle cells in programmed cell death.

There are 12 known human caspases. The enzymes are synthesized as pro-caspase zymogens with a prodomain and two other subunits. The prodomain contains regions that allow it to interact with other molecules that regulate the enzyme’s activity. The caspases come in two forms. The initiator caspases, when activated, activate the effector caspases. The effector caspases cleave other proteins in the cell. Targets for effector caspase cleavage action include the nuclear lamins (fibrous proteins providing structural integrity to the nucleus), ICAD/DFF45 (an inhibitor of DNAse), PARP (flags areas where DNA repair needed), and PAK2 (apoptotic regulation).

The caspase activation cascade can itself be activated by granzyme B (a serine protease secreted by natural killer cells and cytotoxic T-cells), cellular death receptors, and the apoptosome (large protein structure in apoptotic cells stimulated by release of cytochrome C from the mitochondria). Each of these activators is responsible for activating different groups of caspases.

Metalloproteases (Figure 4.64) are enzymes whose catalytic mechanism for breaking peptide bonds involves a metal. Most metalloproteases use zinc as their metal, but a few use cobalt, coordinated to the protein by three amino acid residues with a labile water at the fourth position. A variety of side chains are used - histidine, aspartate, glutamate, arginine, and lysine. The water is the target of action of the metal which, upon binding of the proper substrate, abstracts a proton to create a nucleophilic hydroxyl group that attacks the peptide bond, cleaving it (Figure 4.64). Since the nucleophile here is not attached covalently to the enzyme, neither of the cleaved peptides ends up attached to the enzyme during the catalytic process. Examples of metalloproteases include carboxypeptidases, aminopeptidases, insulinases and thermolysin. As the name suggests, aspartyl proteases use aspartic acid in their catalytic mechanism (Figures 4.63 & 4.65). Like the metalloproteases, aspartyl proteases activate a water to create a nucleophile for catalysis (Figure 4.65). The activated water attacks the peptide bond of the bound substrate and releases the two pieces without the need to release a bound intermediate, since water is not covalently attached to the enzyme. Common aspartyl proteases include pepsin, signal peptidase II, and HIV-1 protease.

Though threonine has an R-group with a hydroxyl like serine, the mechanism of action of this class of proteases differs somewhat from the serine proteases. There are some similarities. First, the threonine’s hydroxyl plays a role in catalysis and that is to act as a nucleophile. The nucleophile is created, however, not by a catalytic triad, but rather as a result of threonine’s own α-amine group abstracting a proton.

Because of this, the nucleophilic threonine in a threonine protease must be at the n-terminus of the enzyme. Nucleophilic attack of the peptide bond in the target protease results in breakage of the bond to release one peptide and the other is covalently attached to serine, like the serine proteases. Also, as with the serine proteases, water must come in to release the covalently linked second peptide to conclude the catalytic mechanism.

Examples of threonine proteases include the catalytic subunits of the proteasome. Some acyl transferases (such as ornithine acyltransferase) have evolved the same catalytic mechanism by convergent evolution. The latter enzymes use ornithine instead of water to break the enzyme-substrate covalent bond, with the result that the acyl-group becomes attached to ornithine, instead of water.

Molecules which inhibit the catalytic action of proteases are known as protease inhibitors. These come in a variety of forms and have biological and medicinal uses. Many biological inhibitors are proteins themselves. Protease inhibitors can act in several ways, including as a suicide inhibitor, a transition state inhibitor, a denaturant, and as a chelating agent. Some work only on specific classes of enzymes. For example, most known aspartyl proteases are inhibited by pepstatin. Metalloproteases are sensitive to anything that removes the metal they require for catalysis. Zinc-containing metalloproteases, for example, are very sensitive to EDTA, which chelates the zinc ion.

One category of proteinaceous protease inhibitors is known as the serpins. Serpins inhibit serine proteases that act like chymotrypsin. 36 of them are known in humans.

Serpins can be broad in their specificity. Some, for example, can block the activity of cysteine proteases. One of the best known biological serpins is α-1-anti-trypsin (A1AT - Figure 4.66) because of its role in lungs, where it functions to inhibit the elastase protease. Deficiency of A1AT leads to emphysema. This can arise as a result of genetic deficiency or by cigarette smoking. Reactive oxygen species produced by cigarette smoking can oxidize a critical methionine residue (#358 of the processed form) in A1AT, rendering it unable to inhibit elastase. Uninhibited, elastase can attack lung tissue and cause emphysema. Most serpins work extracellularly. In blood, for example, serpins like antithrombin can help to regulate the clotting process. They are part of drug “cocktails” used to inhibit the spread of HIV in the body and are also used to treat other viral infections, including hepatitis C. They have also been investigated for use in treatment of malaria and may have some application in anti-cancer therapies as well.